Deviled Eggs: The classic way I think of when I want to use up hard boiled eggs. There are thousands of versions of this recipe and when I was looking up ideas may lists of “hard boiled egg recipes” were just modified deviled eggs. I’m not going to do that to you. My list of 20 are distinctly different ideas! 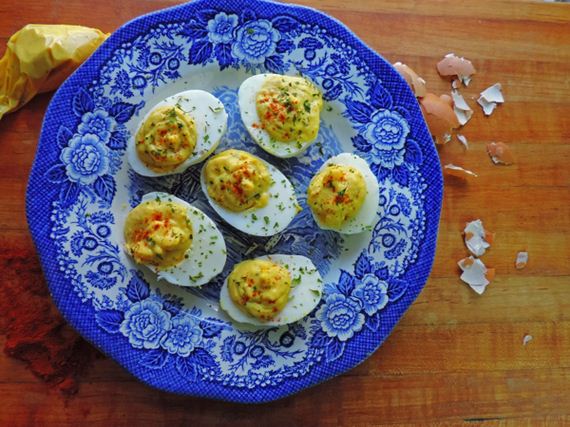 Deviled Egg Dip: Okay.. so maybe this is a variation on a deviled egg, but the delivery is so different, I’m giving it it’s own spot in the list! 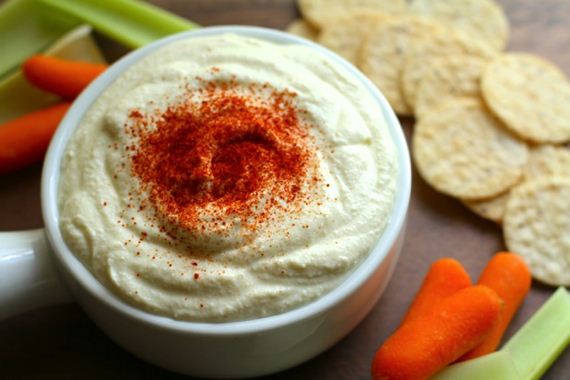 Pinxtos (Tapas): Tapas are Spanish bite sized treats (or small plates) which , and there are some that Pintxtos (or Pinchos) are specifically regional tapas (from the Basque region) that have been “stabbed” with a toothpick or skewer. There are many varieties of Tapas/Pintxos and some of them use hard boiled eggs (huevos) as an ingredient frequently combined with sardines, salmon or tuna.. Others, like this mushroom and egg version don’t use seafood. 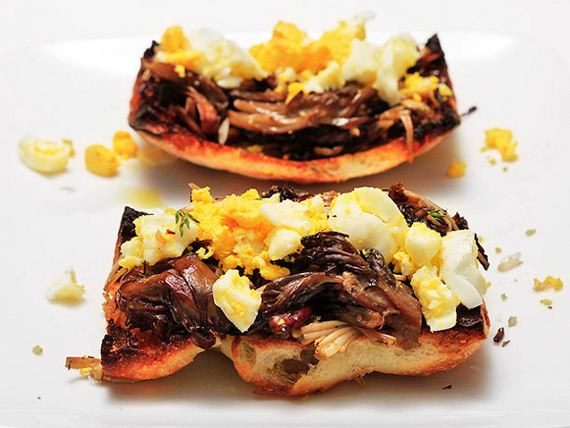 Pickled Eggs: As I mentioned it in the intro, pickled eggs aren’t my thing. But some people love them, so if you do.. have at it! 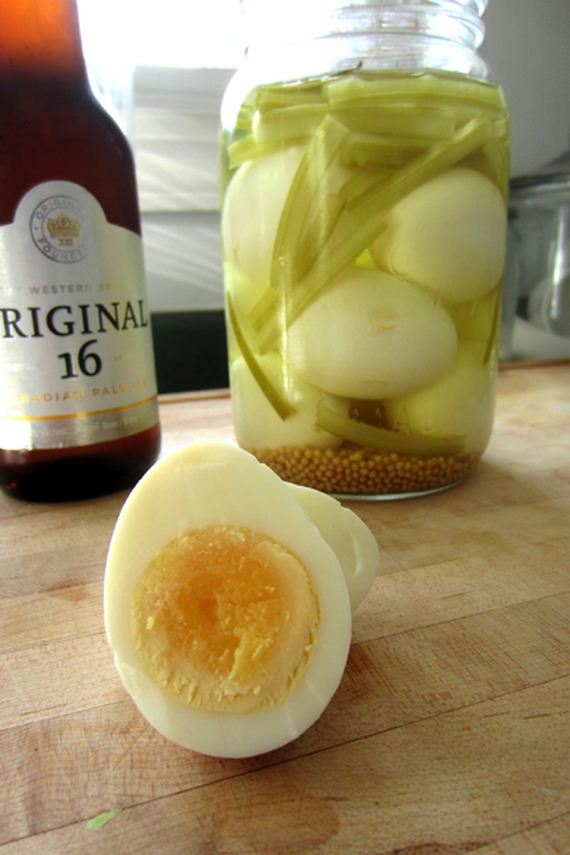 Egg Salad: Another classic “use up my eggs quick” recipe, and it is great since you can get rid of a lot of them at once. I like my egg salad pretty plain, and so this recipe hits the mark, but once again if you look around you will find a lot of variety in the egg salad world. 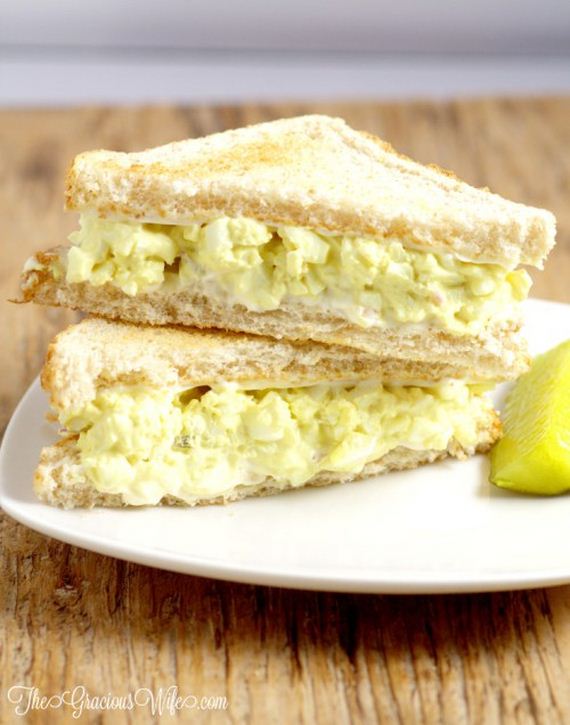 Potato Salad: If you can’t stand huge bites of egg, you can always ‘dilute’ them out by using them in potato salad instead. 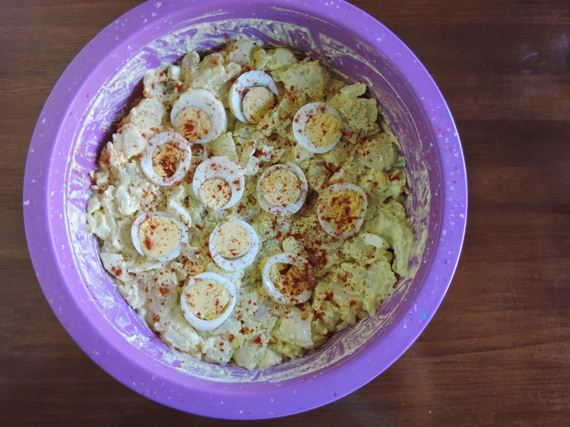 Tuna or Chicken Salad: Although less traditional, but similar to potato and egg salad, mayonnaise based tuna and chicken salads are a great way to use up a couple hard boiled eggs and add a little protein punch to your lunch! 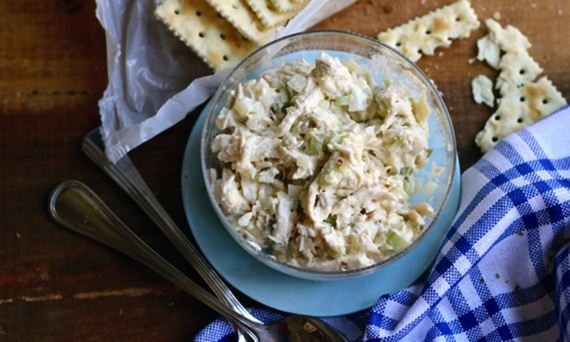 Macaroni Salad: Okay, so if you haven’t caught on to the theme here.. once again, chopping up hard boiled eggs into pasta salad is another option, and nothing screams “summer” as much as macaroni salad! 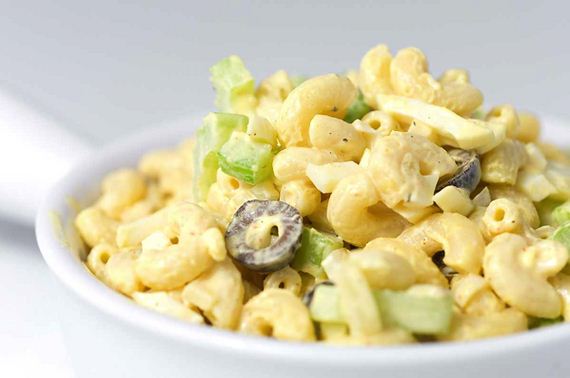 Tuna Melts: If the idea of cold eggs grosses you out, you can always go the tuna melt route. The Pioneer Woman serves hers on toast rounds, but I like mine in the panini maker! 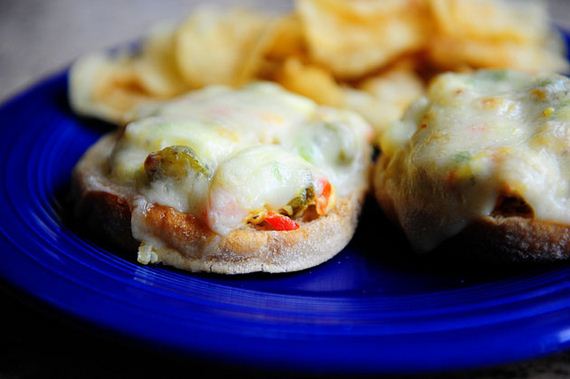 Cobb Salad: My husband hates mayonnaise so that really limits some of the other egg salads ideas I’ve already shared. But if you team up those eggs with some bacon, ham and cheese and that is a whole other story! I personally love this BBQ version. 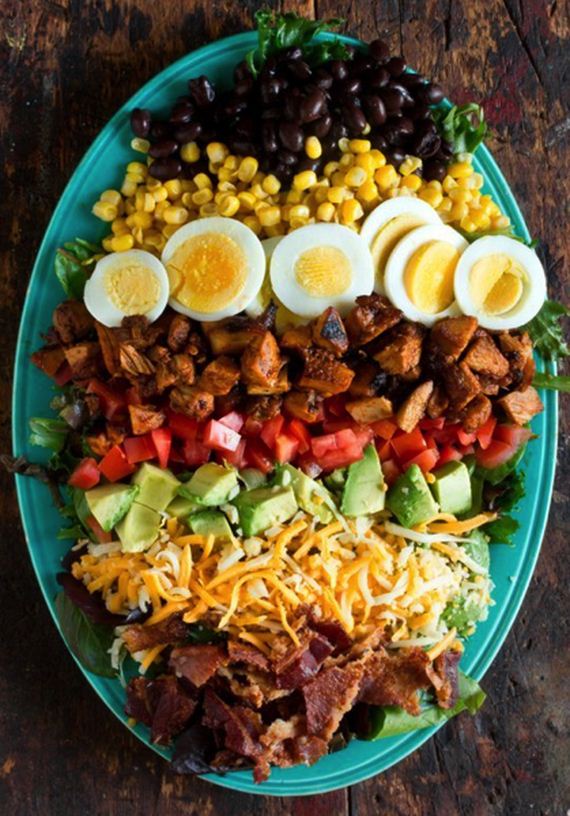 Nicoise Salad: To me, Nicoise salad is just the fancy pants version of the Cobb salad.. Or really, what would happen if tuna salad and Cobb salad had a baby while on vacation in the Mediterranean. Granted, it is a French.. so maybe I’m way off base. If you have never assembled a Nicoise salad, Martha’s recipe is fairly easy, but if you want to kick it up a little (and believe the glowing reviews) Emeril’s is the version you may want to try. 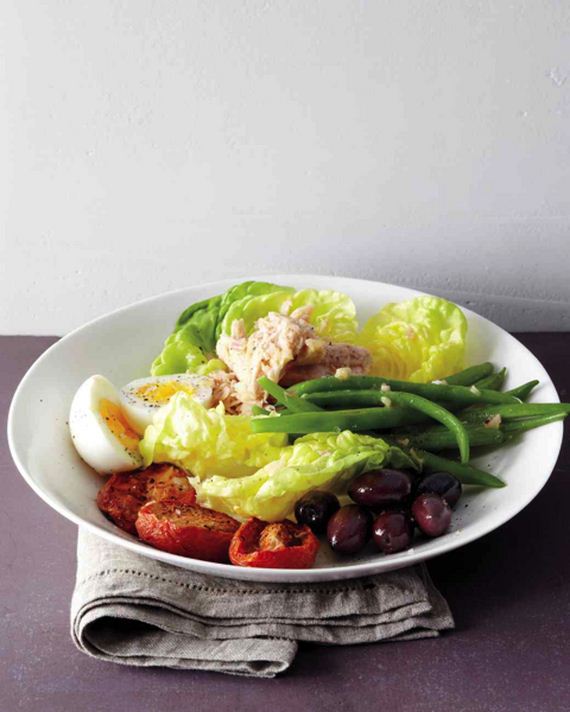 Seven Layer Salad: Growing up my mom would make seven layer salad for every church potluck and picnic. There is something really comforting about it. 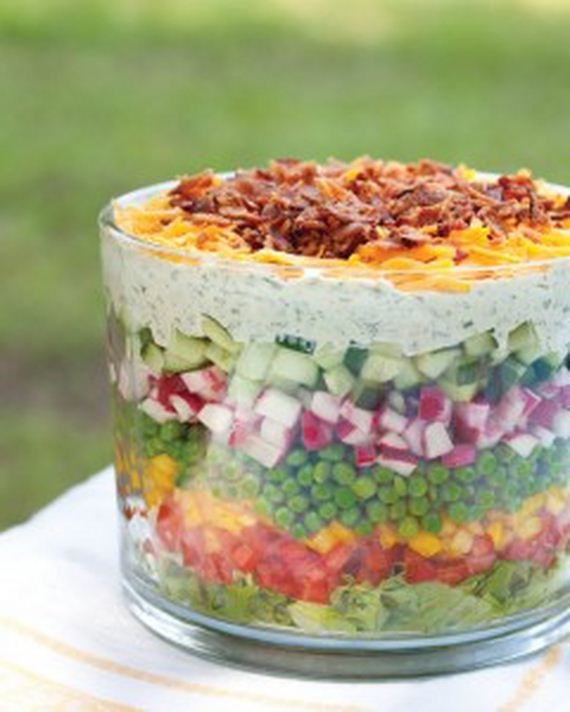 Pan Bagnat Sandwiches: This is a sandwich that is bursting with flavor, since you soak the bread in vinegar and oil. It is a french recipe which uses tuna and eggs and is very similar to Nicoise salad on bread. The nice part is that it lends itself well to using up whatever produce you have in the fridge and can be made ahead of time, since the flavors only get better as they soak into the bread. If you want a little humor with your sandwich, may sure to check out Alton’s Recipe. 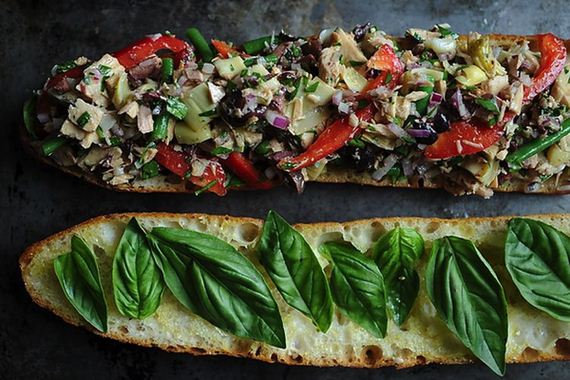 Sliced Egg Sandwiches: Forget all the other mumbo jumbo. If you aren’t a fan of all the added fats from cream based salad sandwiches, you can cut straight to the chase and eat nothing but the hard boiled eggs themselves. Just like any other protein sandwich (turkey, ham, bologna), you can slice up some eggs and slap them on some bread with lettuce and tomato, and lunch is ready! 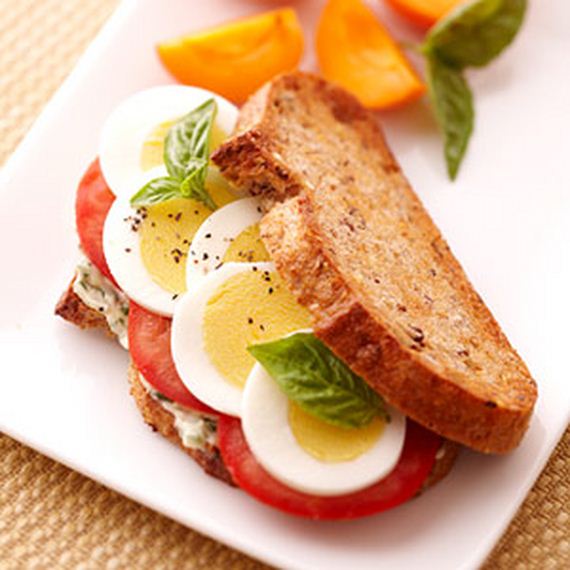 ENTREES:
Scotch Eggs: Wrap eggs in sausage and bake? I think the brits are on to something 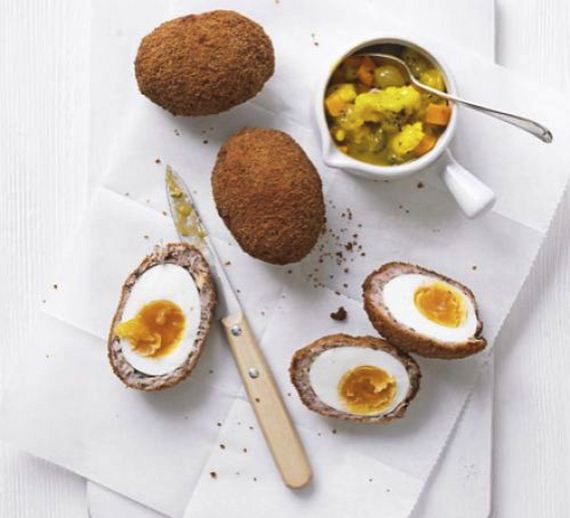 Breakfast English Muffin Pizzas: Great for either breakfast or lunch, using eggs and english muffins to create little ‘pizzas’ is a fun idea. 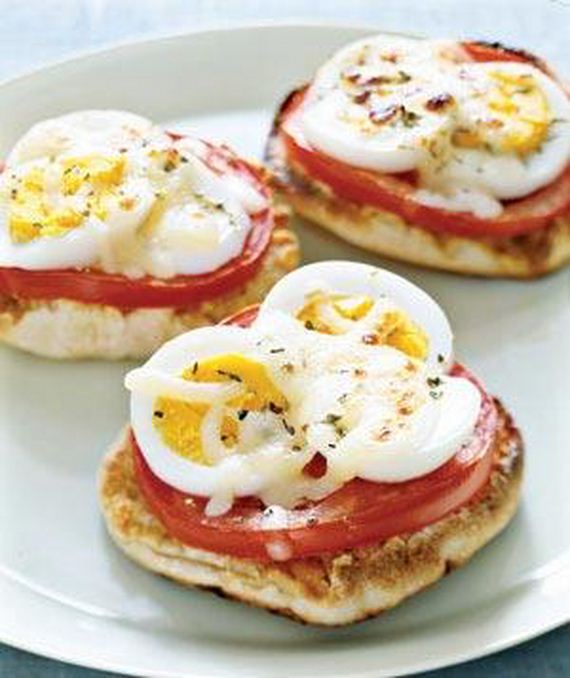 Meatloaf My grandma always included hard boiled eggs in her meatloaf. I’ve never done it, but if you were looking for a way to use them up, that is always an option.

Soy Sauce Eggs (Shoyu Tamago): Granted, these are not the most attractive things I’ve ever seen, but don’t let the exterior fool you. These Chinese eggs are boiled in soy sauce, brown sugar and ginger and then served in the braising liquid either on their own or over noodles. 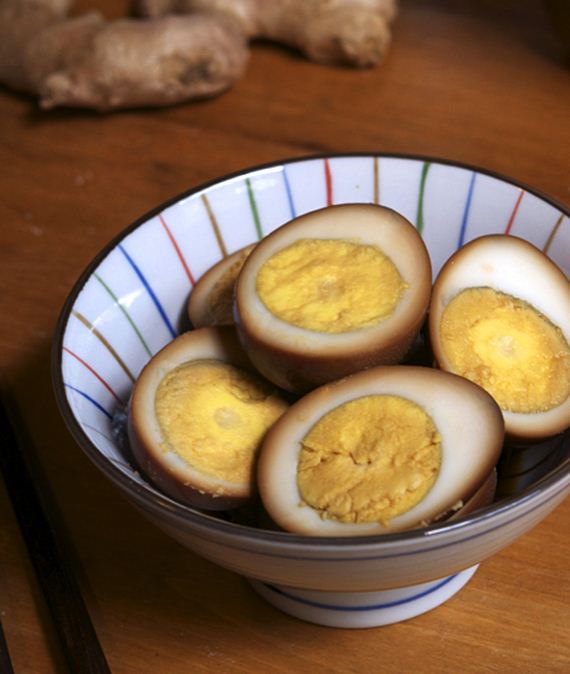 Ramen Soup: Eggs in noodle soups are a pretty common in Asia. A great substitute for chicken, beef or pork. 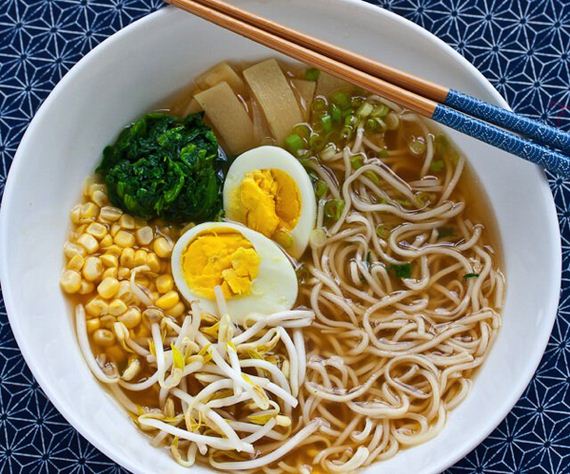 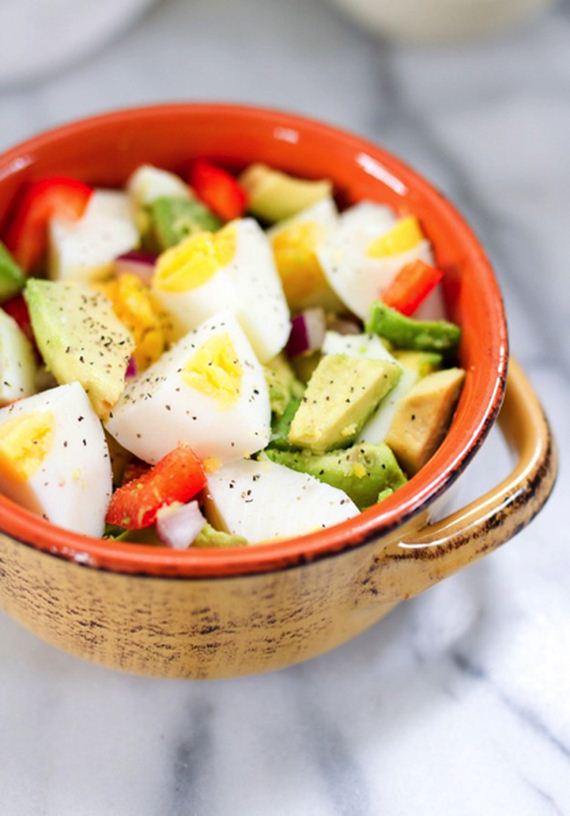 Fried Rice: Most typically a fried or scrambled egg is added to fried rice, but chopping up a hard boiled egg into your stir fry is a smart alternative. 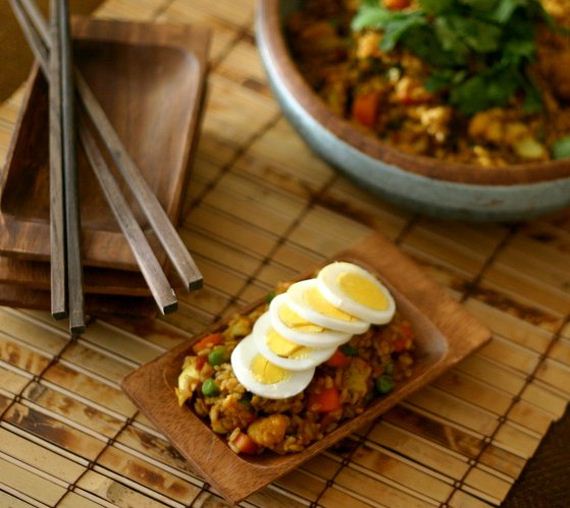