Naturally, we turned to the online crafting community for help and suggestions, since inspiration there is basically endless. Here are 15 of the cutest bumblebee themed crafts and projects we’ve come across so far (and we’ve even already tried a few)! 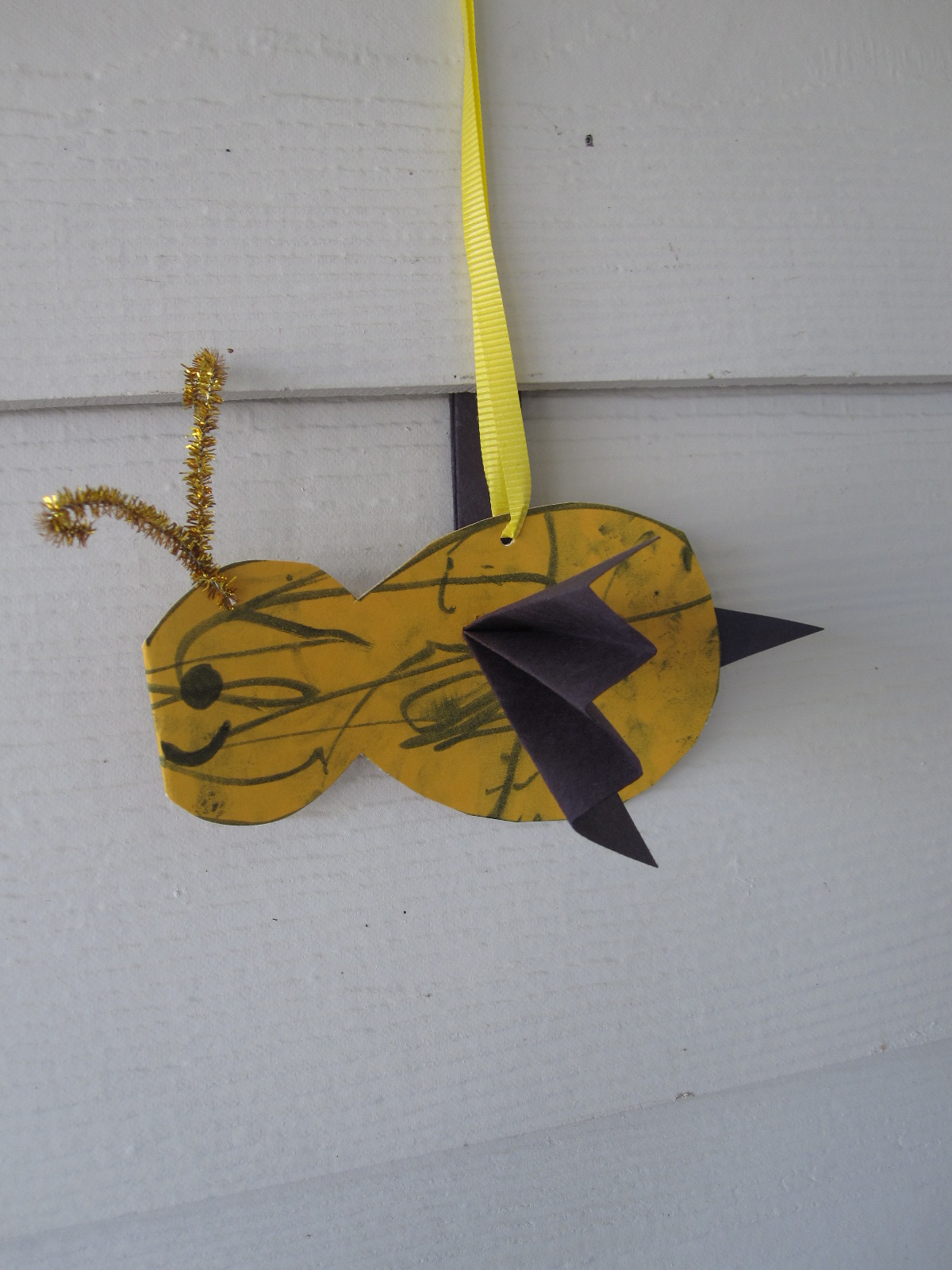 Are your kids very little so you’re looking for something extremely simple but you’d also prefer that it has more than one crafting technique involved, as opposed to just being a cut and paste craft for example? Then we’d suggest giving these adorable little baby bumblebees from No Time for Flashcards a try! Your kids will get to cut, paste, colour, and fold their way to an adorable finished product. 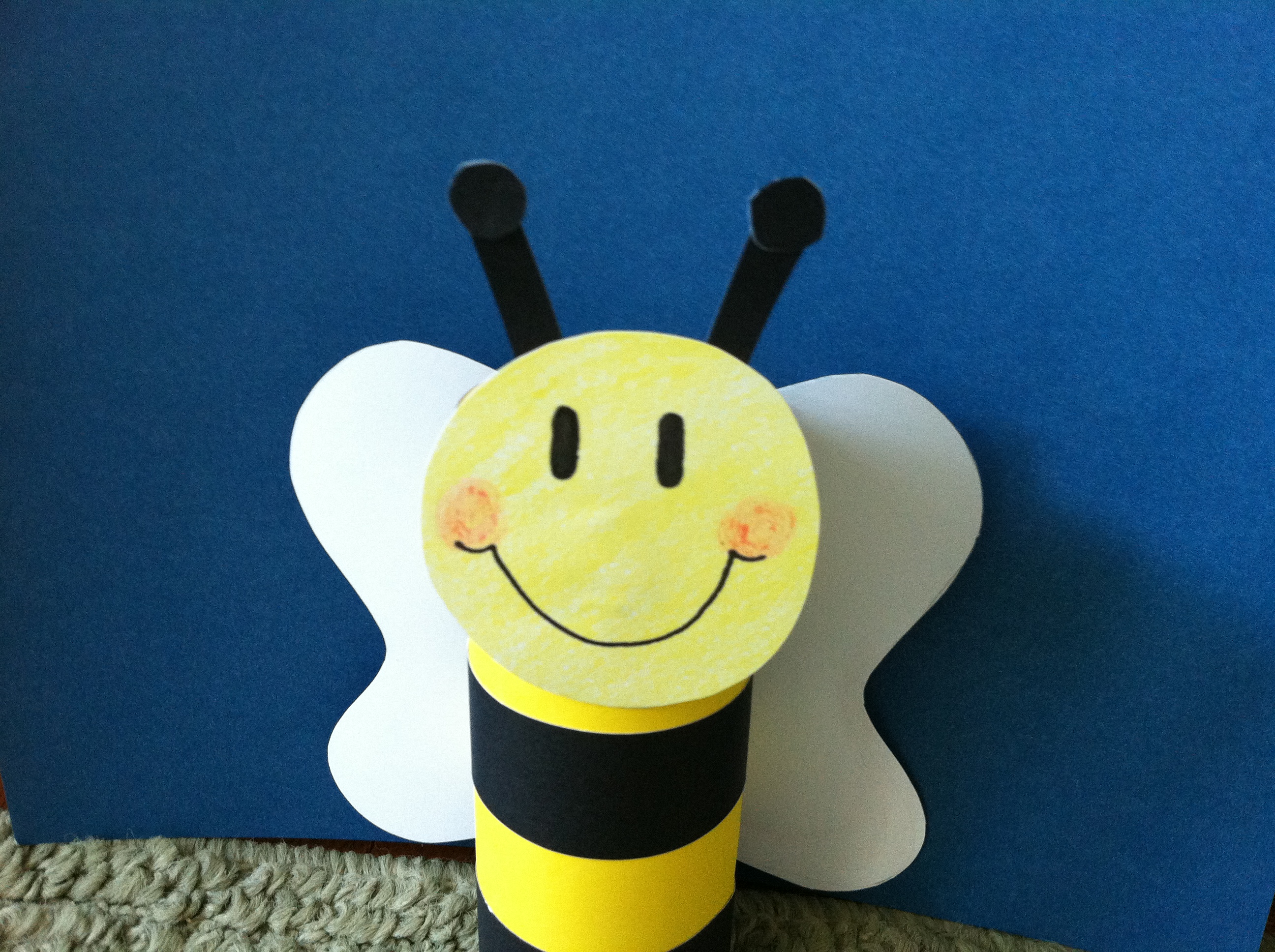 If you’re anything like us, you’re a big fan of kids’ crafts that can be made with recycled materials or things you already have at home? Then we have a feeling you’re no stranger to the very refined art of making things with toilet paper rolls! Of course, because you can transform a toilet paper roll into anything under the sun, we knew there just had to be a tutorial out there that would show us how to make it happen with bumblebees. We have Katie’s Craft Central to thank for coming through on that idea! 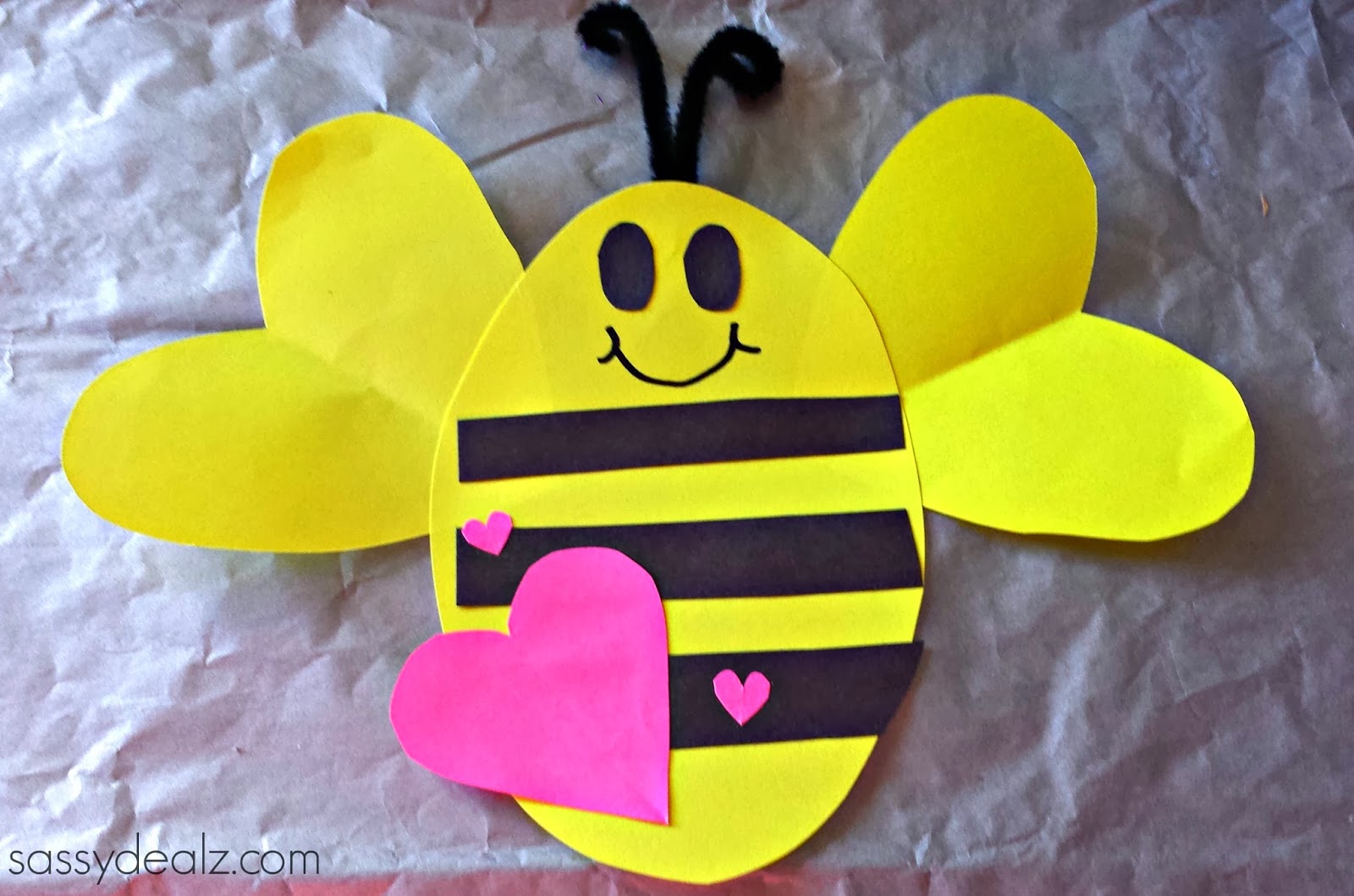 Valentine’s day might be long past by now but if you ask us, Valentine themed crafts are still a lot of fun to make with little kids all year round. As cheesy as it sounds, we never need an excuse to show our kids that we love them! That’s why we loved the idea of combining our bumblebee idea with a few cute love hearts. Crafty Morning guides you through the process of making adorable little bees from paper using heart shapes to make the wings. 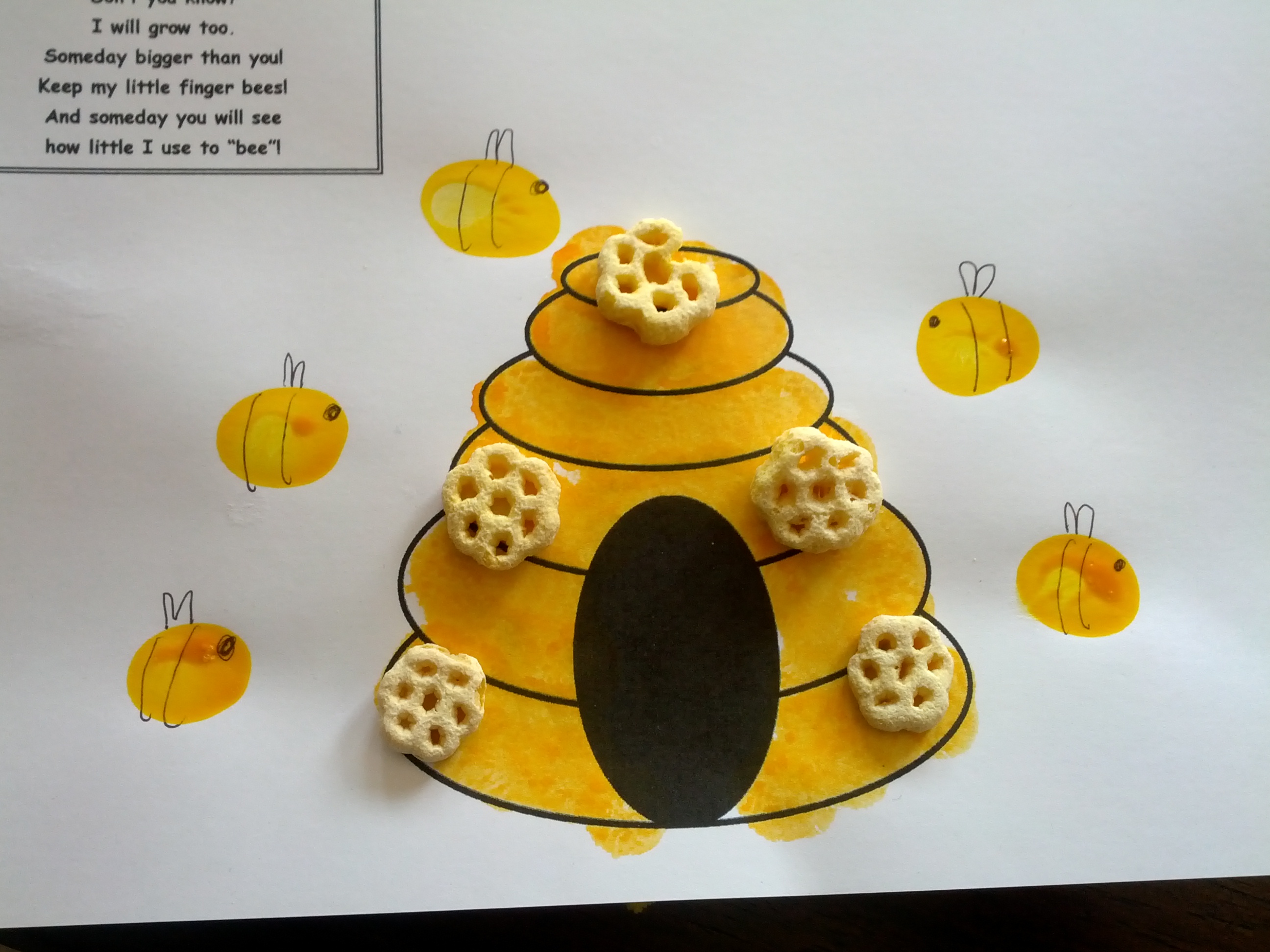 Usually you’ll find us teaching our kids not to play with their food but when it comes to crafting, sometimes we make exceptions. After all, getting the chance to use something called Honey Combs in a painting of a honey bee’s hive is almost too good an opportunity to pass up no matter how old you are. That’s why we liked this idea from Teaching Heart so much! You could paint it or colour it; whatever your kids prefer. You could even draw your own rather than getting a print out! 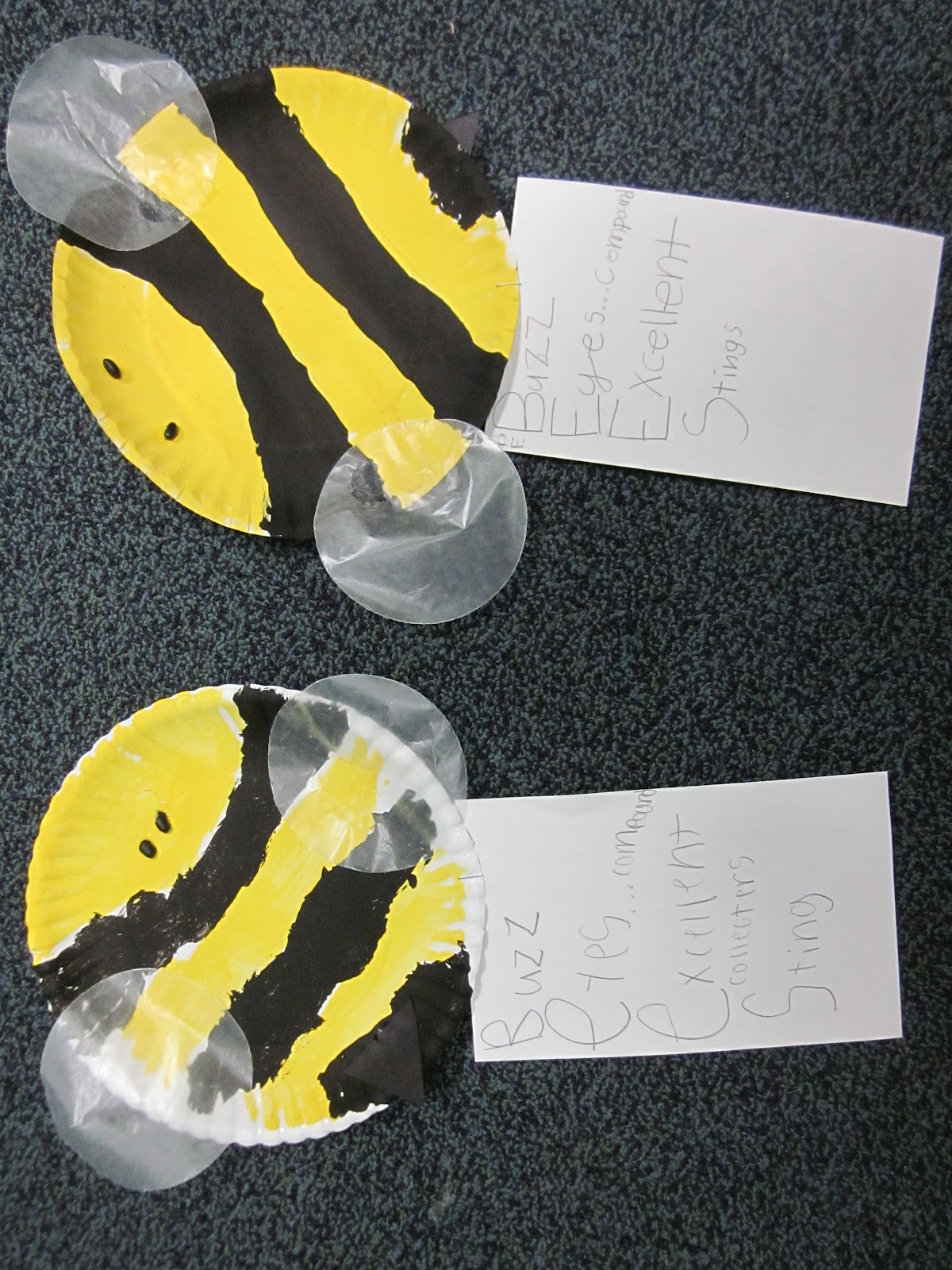 Paper plates are another one of those crafting supplies just like toilet paper rolls that you can turn into practically anything even though they are, in reality, just simple paper circles. We doubt you’ll be surprised, then, that we found a tutorial that will help your kids learned how to make bumblebees out of those circles! Beg, Borrow, Steal guides you through the process of turning a simple paper plate into the cutest, fattest little bumblebee we’ve ever seen. We can’t get over how cool the idea of using wax paper to mimic the thinness of an actual bee’s wings! 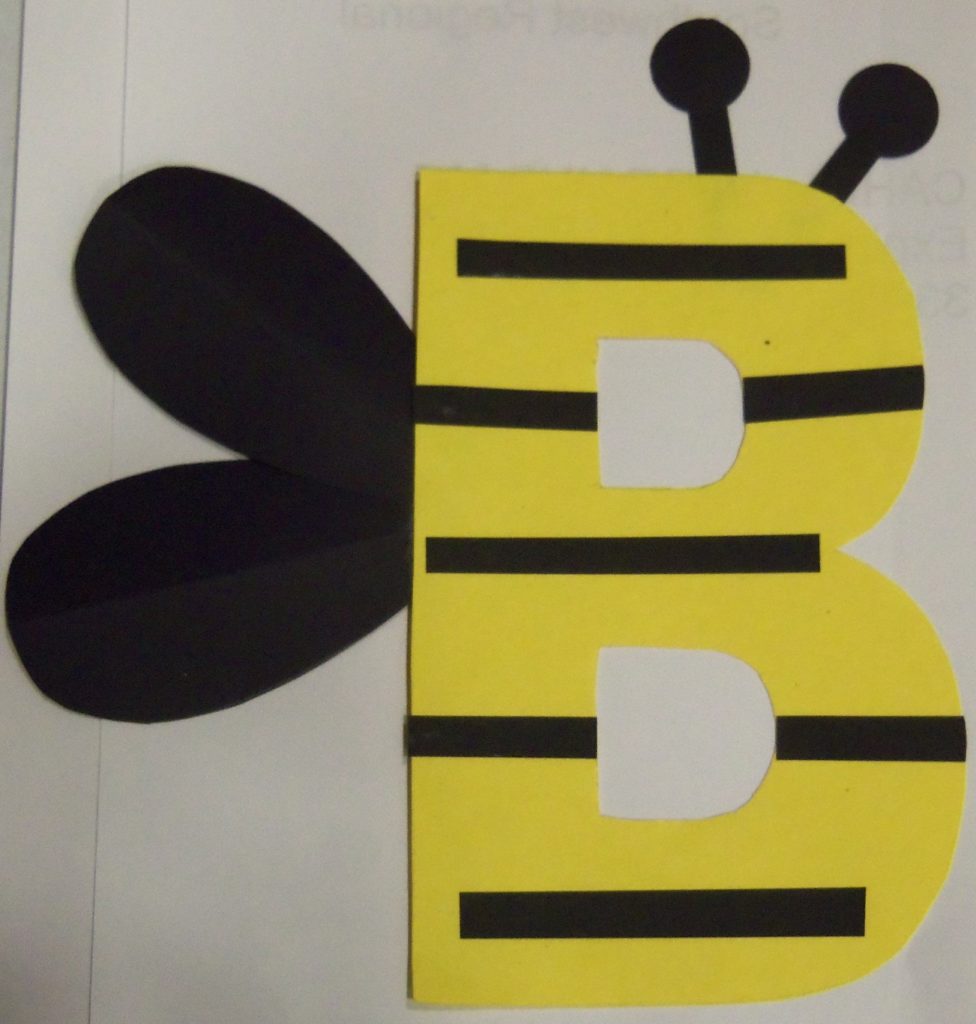 Perhaps you’re looking for fun and unique ways to help your kids learn their alphabet and remember the sounds that each letter makes? Then crafts are absolutely a great way to do that and theming them after things your kids like or are learning about makes for a fantastic memory tool! We quite enjoy this cute suggestion from Pinterest for making paper or foam letters and dressing them up like things that start with that letter, just like this B that looks like a bumblebee. 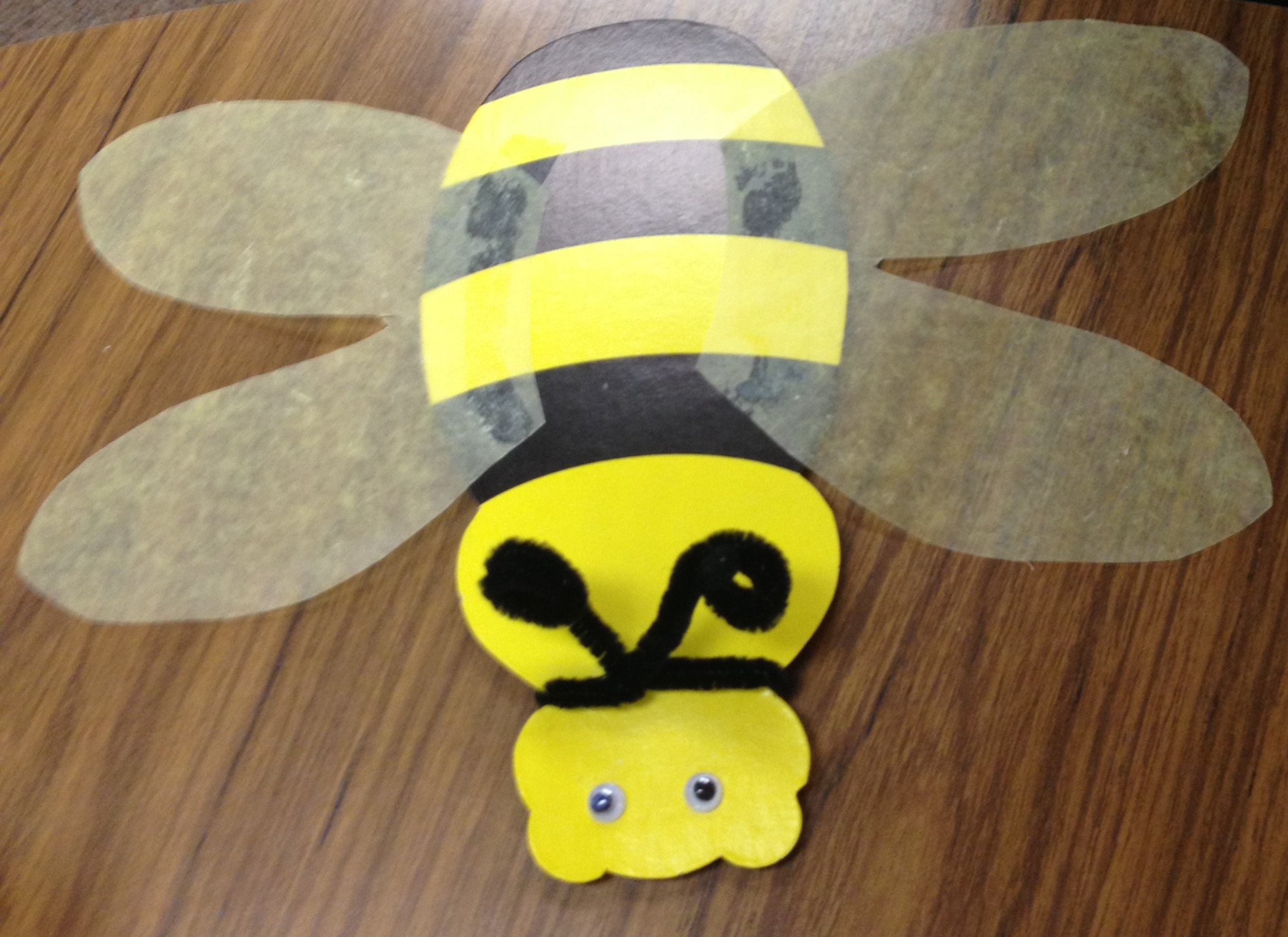 Were you very intrigued by the cute idea of using wax paper to make a bumblebee’s wings but you’d rather not use paper plates because your kids want to do crafts now and you don’t have any left in the kitchen? Well, you don’t have to use paper plates like we showed you before if it’s really the wings you were most interested in. We love the way Loudest Librarian used paper, markers, pipe cleaner, and google eyes to make the body of a striped bee and then added big, awesome looking wax paper wings that are almost see through, just like the real thing. 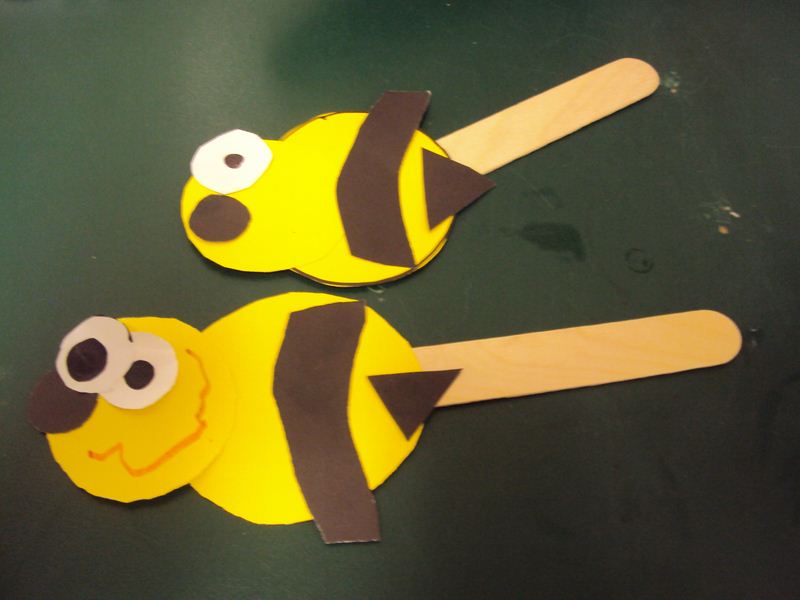 We’ve always loved making funny little puppets with our kids, whether they’re finger puppets or otherwise. Even though we love finger puppets, we find that our kids will actually play with popsicle stick puppets more because they can pick them up and put them down easily without having to clumsily slip them on and off their fingers. They’re also easier to make for very little kids! Check out these adorable little stick puppets featured on Pinterest.

9. Toothpick and construction paper bees with a hive 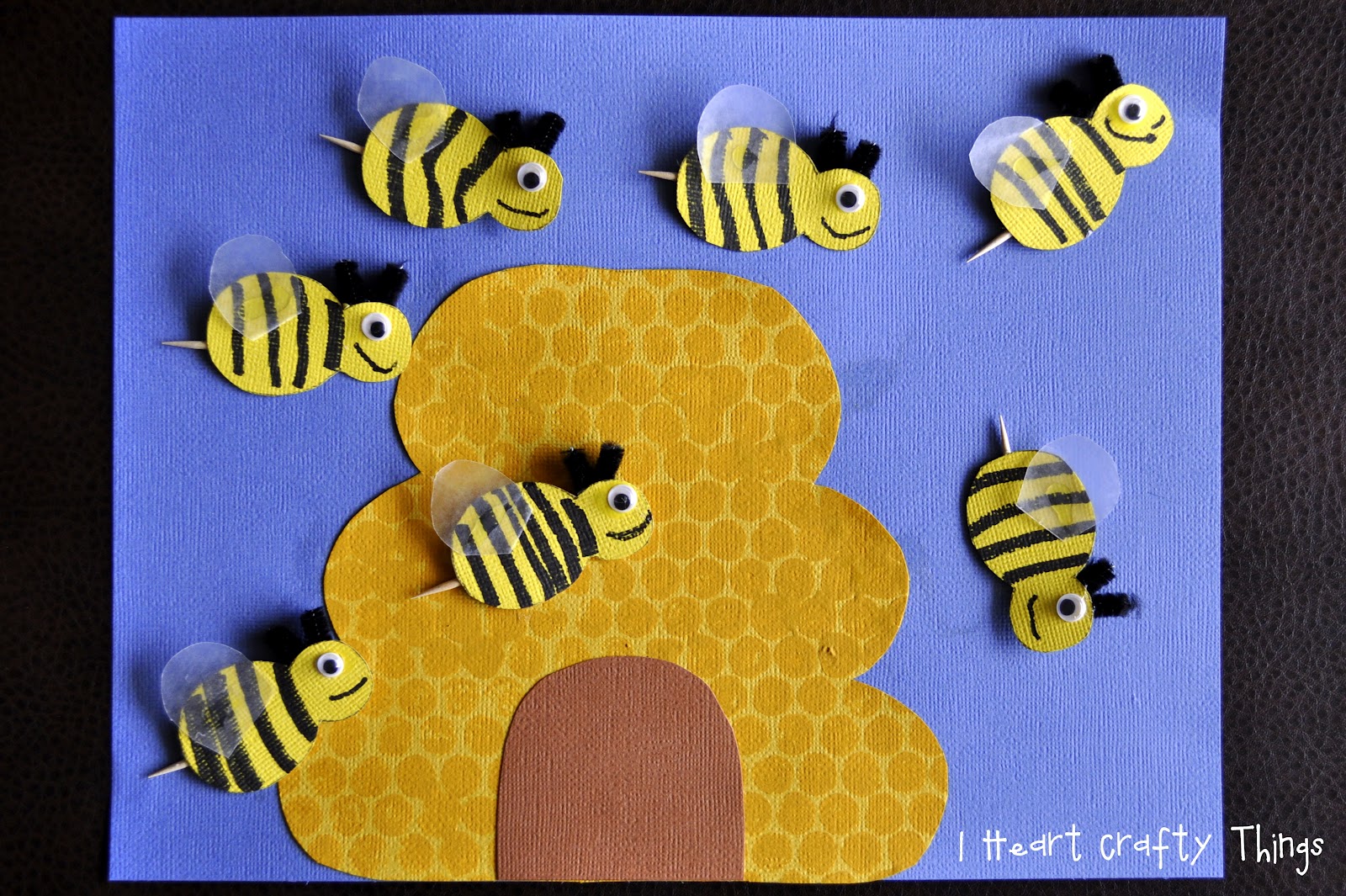 Did you really liked the idea of making a crafted hive for your DIY bumblebees to live in but you’re not sure that using bits of cereal is quite the direction you want to go in? Then perhaps you’d rather make a bubble wrap printed hive with some adorable little toothpick bees instead! We love when a craft has two parts that are equally simple to set up and do but are just different enough from each other to keep our kids doubly interested. Find out how these cuties and their home were made on The Crafty Chicken! 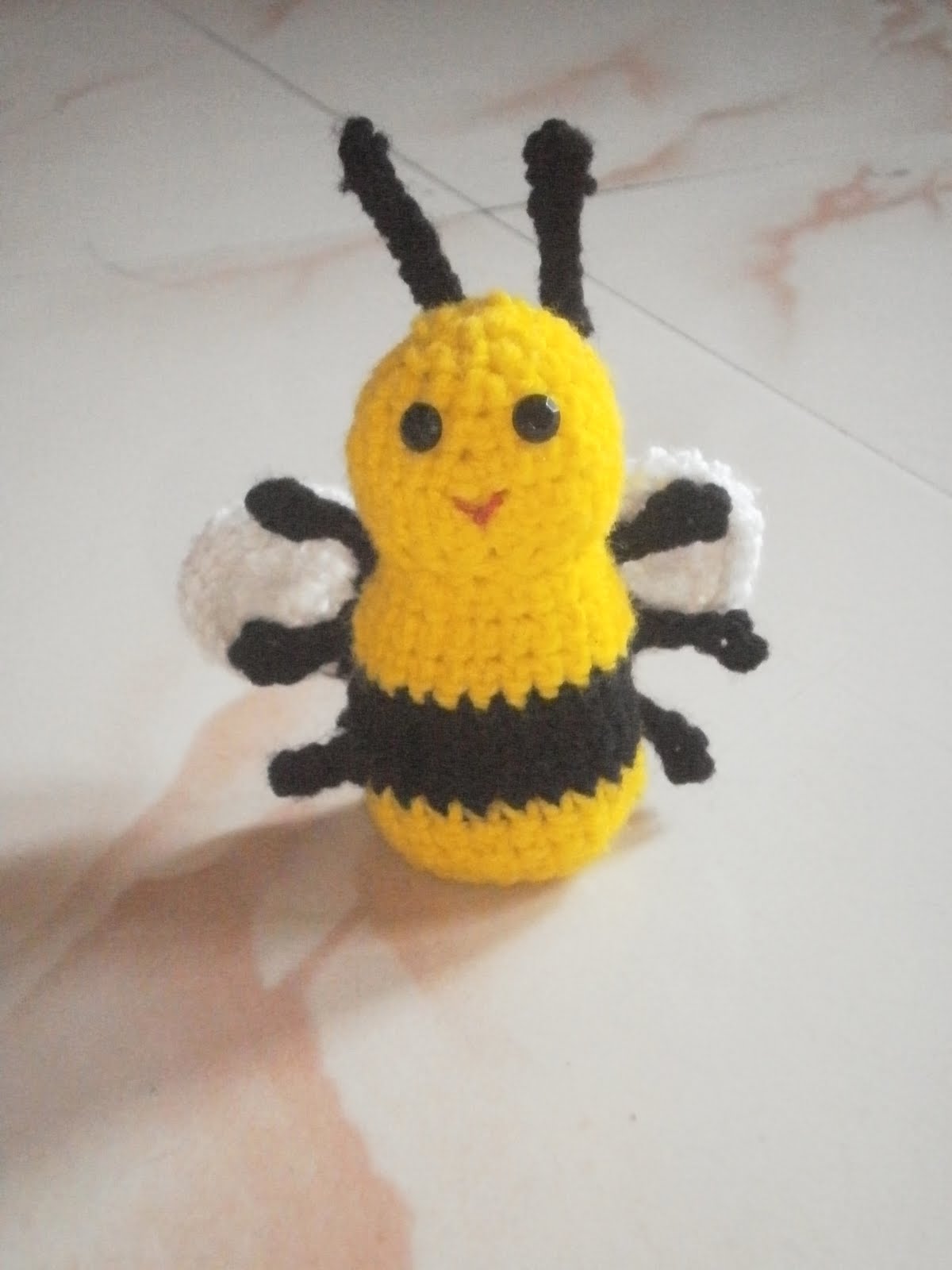 Perhaps you’re looking for something on theme that you can make alongside your kids while they craft that’s perhaps a little bit more challenging? Well, if you’re a yarn crafting enthusiast like we are, then perhaps you’d rather crochet yourself a little bumblebee instead of using scissors and paper! Maha Arts & Crafts has the full pattern for you, along with a few awesome, very helpful tips. 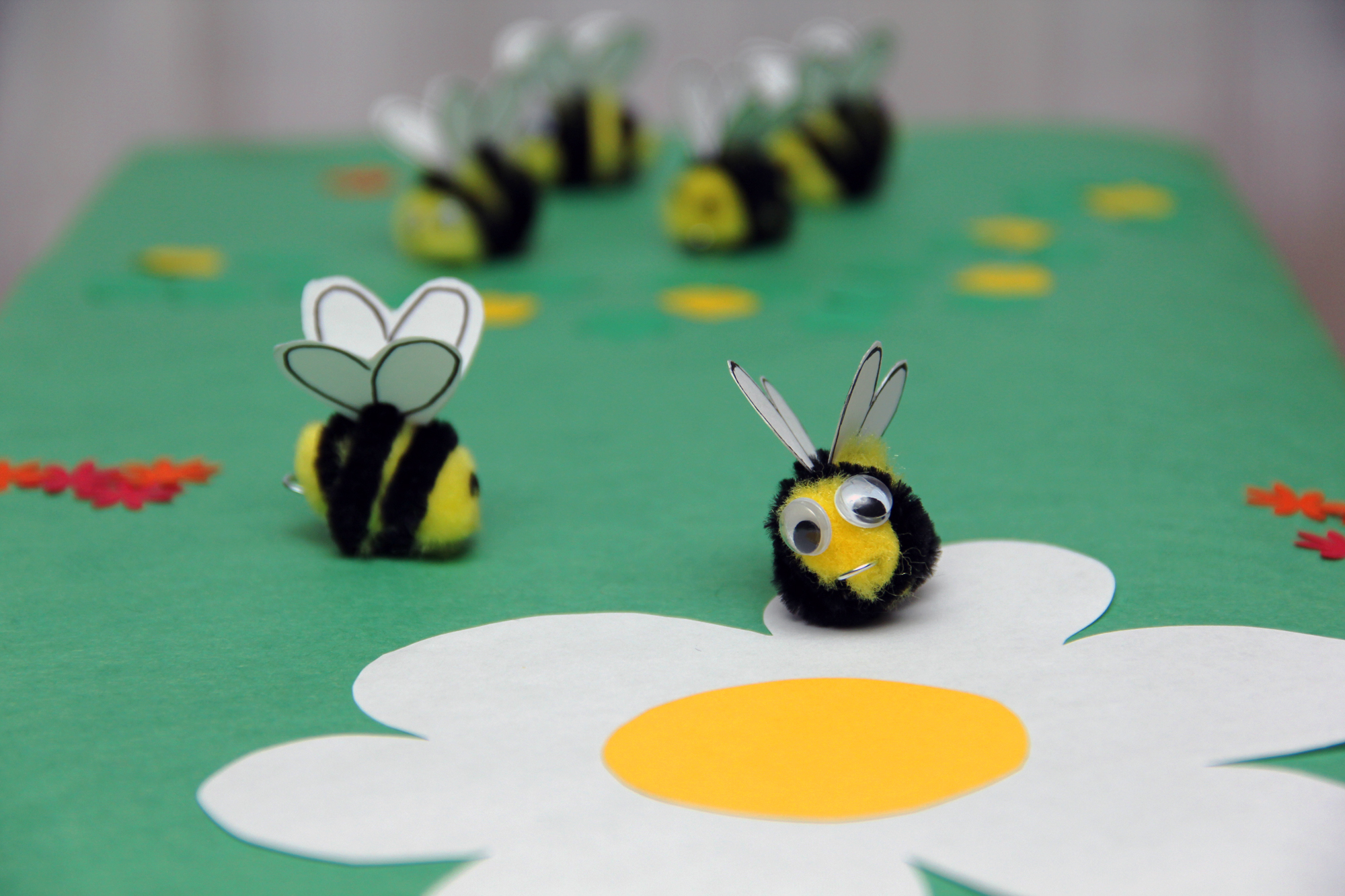 Did we really catch your attention when we started talking about some of the rounder, fatter looking bee crafts because the chubbier the bees are, the cuter they are? Well, on top of being chubby, these adorable little bees are fluffy too, so they’re basically the best thing ever! Pi’ikea Street shows you how they’re made out of yellow pom poms, black pipe cleaners, googly eyes, and little paper wings. 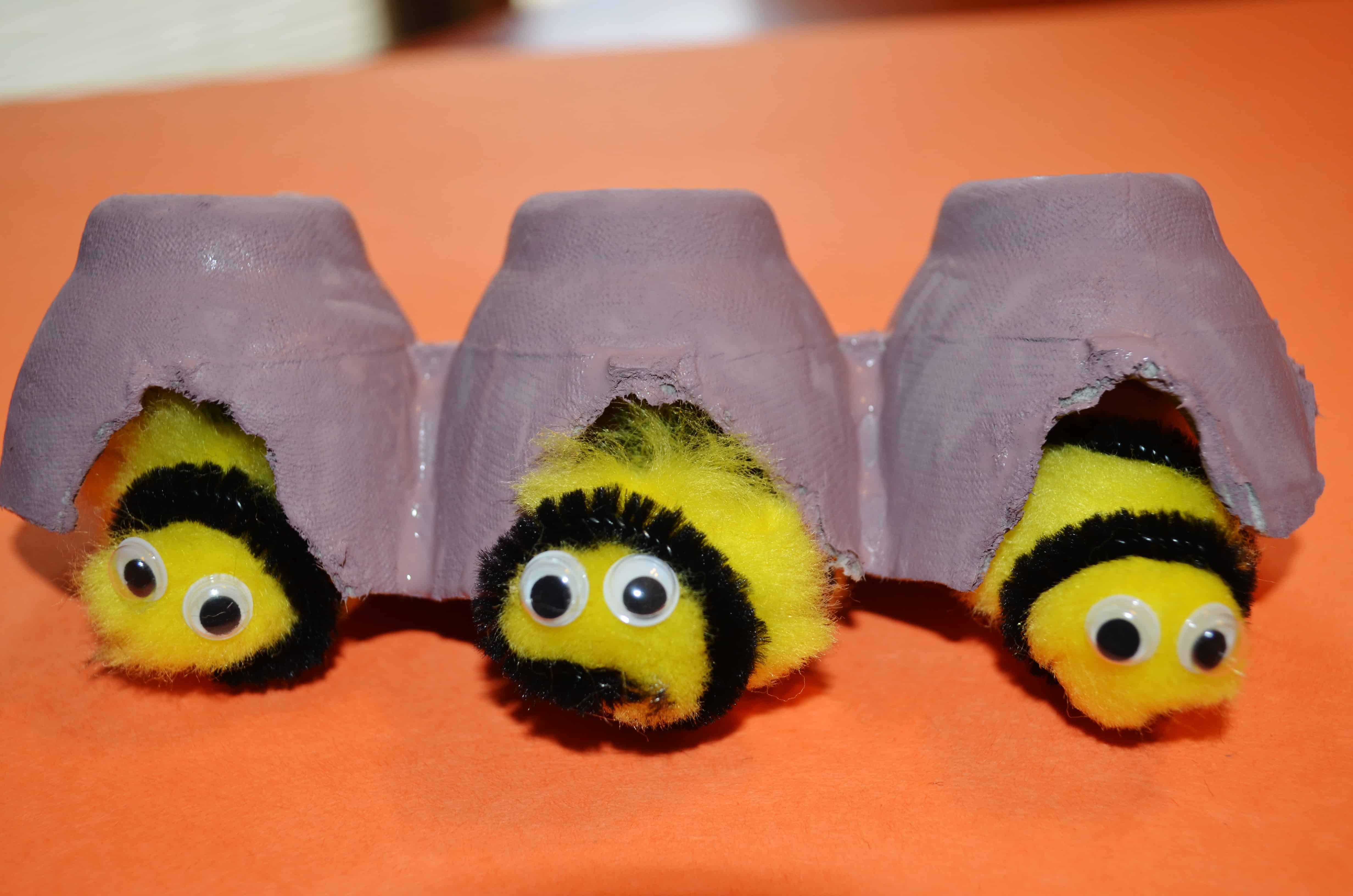 Now that you’ve made your pom pom bumblebees, are your kids looking for a place for their bees to live? Well, we’ve shown you how to draw or paint a few flat hives, but we know that when our kids play, they’d rather be able to nestle whatever little character they’ve made into a cute bed for the night. That’s why we recently helped them make a funny little row of beehives out of an old egg carton. Find out how they’re made on Surviving a Teacher’s Salary! 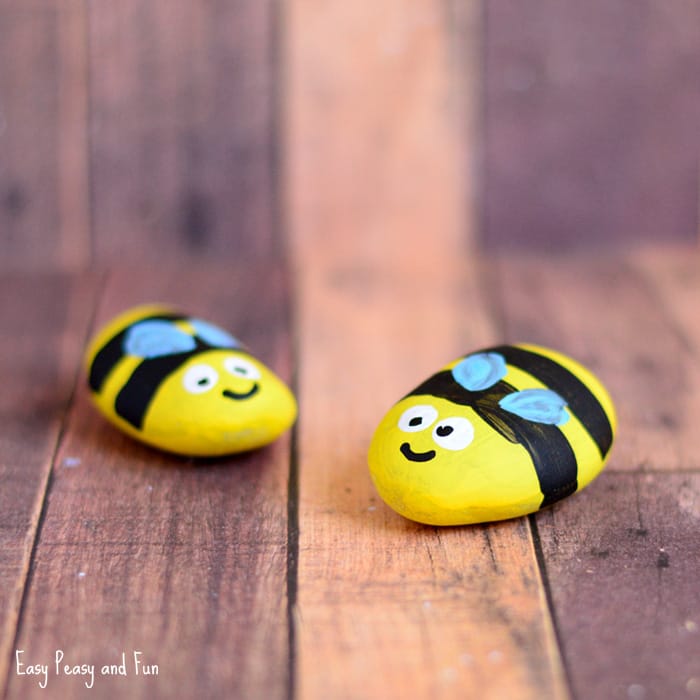 Have your kids’ favourite kind of craft or DIY project always been the ones that revolve around painting, but they still really love working with unconventional materials and getting a little more creative every once in a while? Then we absolutely think you should try rock painting with them! Of course, we found not only a basic idea that suggests painting your rocks to look like bees, but rather a full tutorial to give you a little bit of guidance! Get the full details for these cute bee rocks on Easy, Peasy, and Fun. 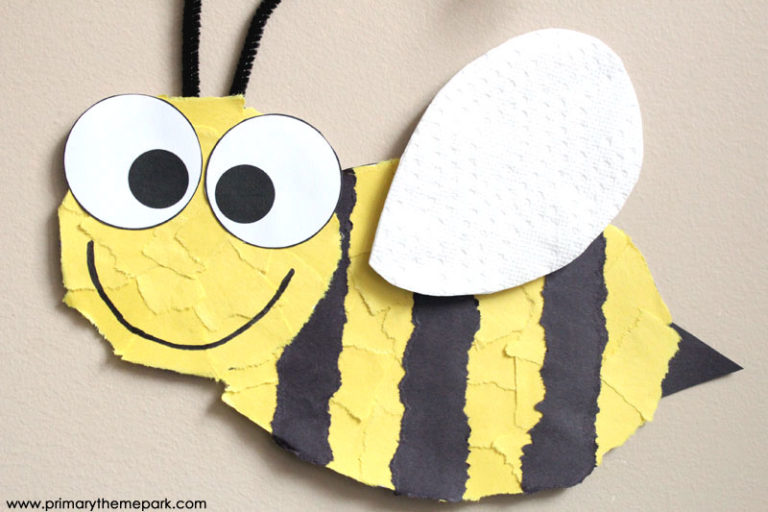 In our house, the crafts that are usually the most popular are the ones that involve getting a little bit messy. That doesn’t necessarily have to meat that we’re reach for the play doh or getting out the paint and glitter! Our kids have actually been huge fans of torn paper crafts lately because it lets them rip things up and put things in order again all in one craft! Find out how these funny torn paper bumblebees are made on Primary Theme Park! 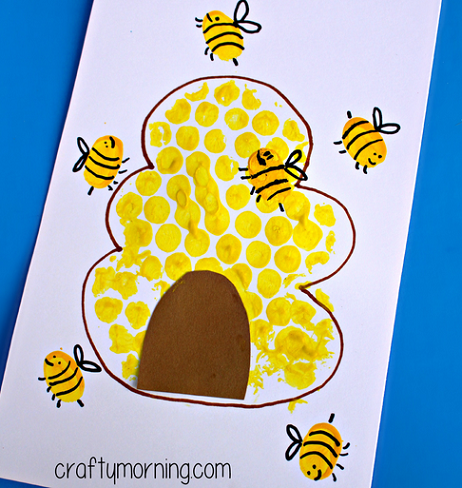 Did we really catch your attention when we started talking about messy crafts but you know your kids would rather get really messy? In that case, there’s always finger painting as an option for literally any theme you can think of! We can’t get over how adorable these little bees and their hive are because each little bee is made by detailing a bright yellow finger print. Learn more about the whole craft on Crafty Morning!