Here are 15 of the coolest concepts anre tutorials we’ve either already tried or saved on our crafting list to try later! 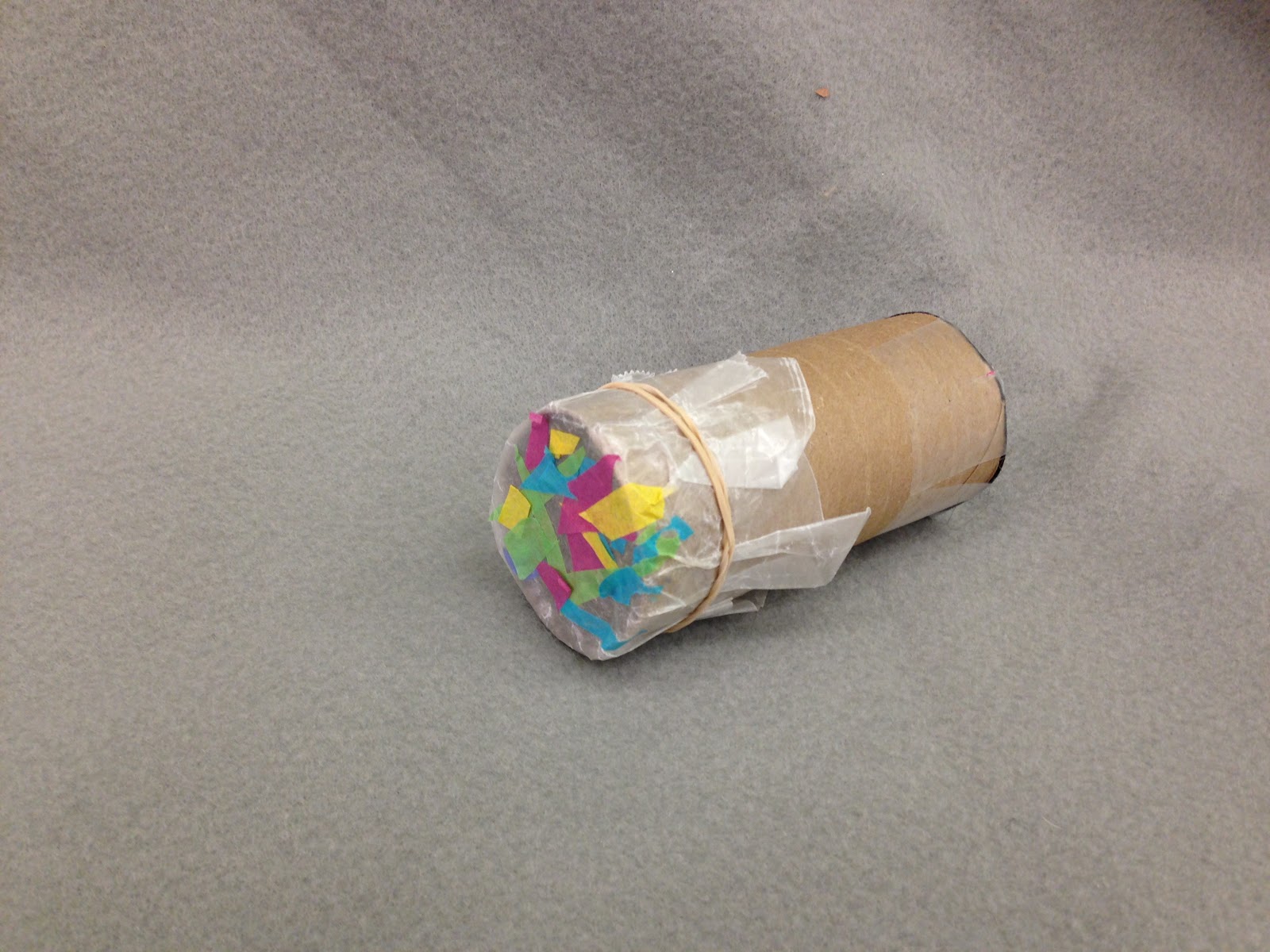 Have you always been a huge fan of encouraging your kids to get crafty with things you already have sitting around the house, especially if it involves upcycling something rather than throwing it out? Then we might just have found the best idea for you right off the bat! The Wielded Pen shows you how a cute, easy kaleidoscope can be made from materials as simple as an empty toilet paper roll, a piece of wax paper, and some bits of coloured tissue paper cut into all different tiny shapes. 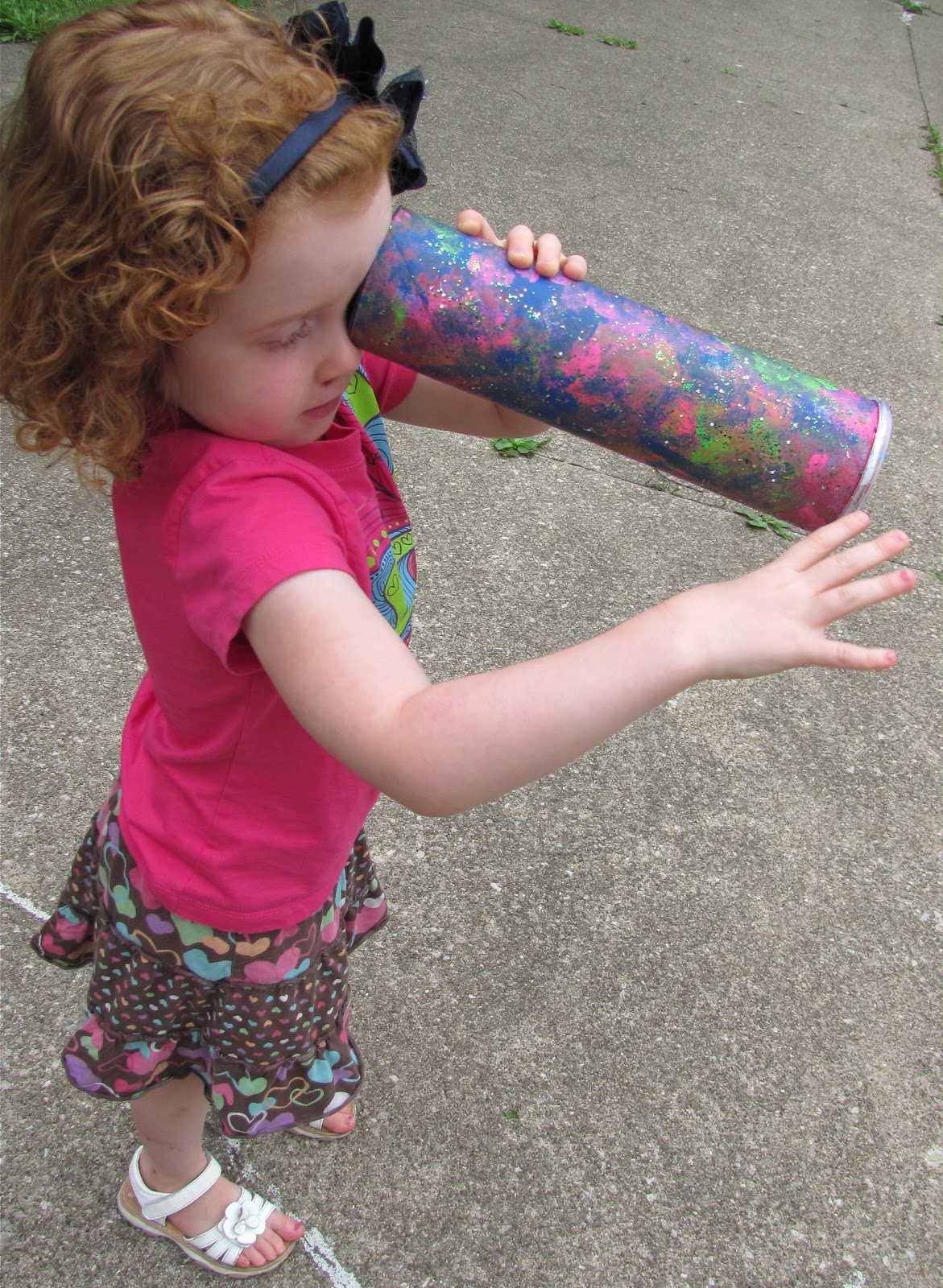 If you’re going to go to the trouble of making your own cardboard kaleidoscopes with your kids, would you rather make one that’s a little longer so they really feel like they’re looking, say, through a telescope and into colourful, geometric space? Well, you could cut a piece from a cardboard wrapping paper tube or wait until you’ve got an empty paper towel roll, but we like the idea of using something that’s already the right length and a little thicker, giving you more space for the fun, colorful pieces. Check out how The Chocolate Muffin Tree created a DIY telescope with a fun outer paint job using an emptied Pringles tube! The big bonus in this project is that you can your kids get to eat the chips inside. 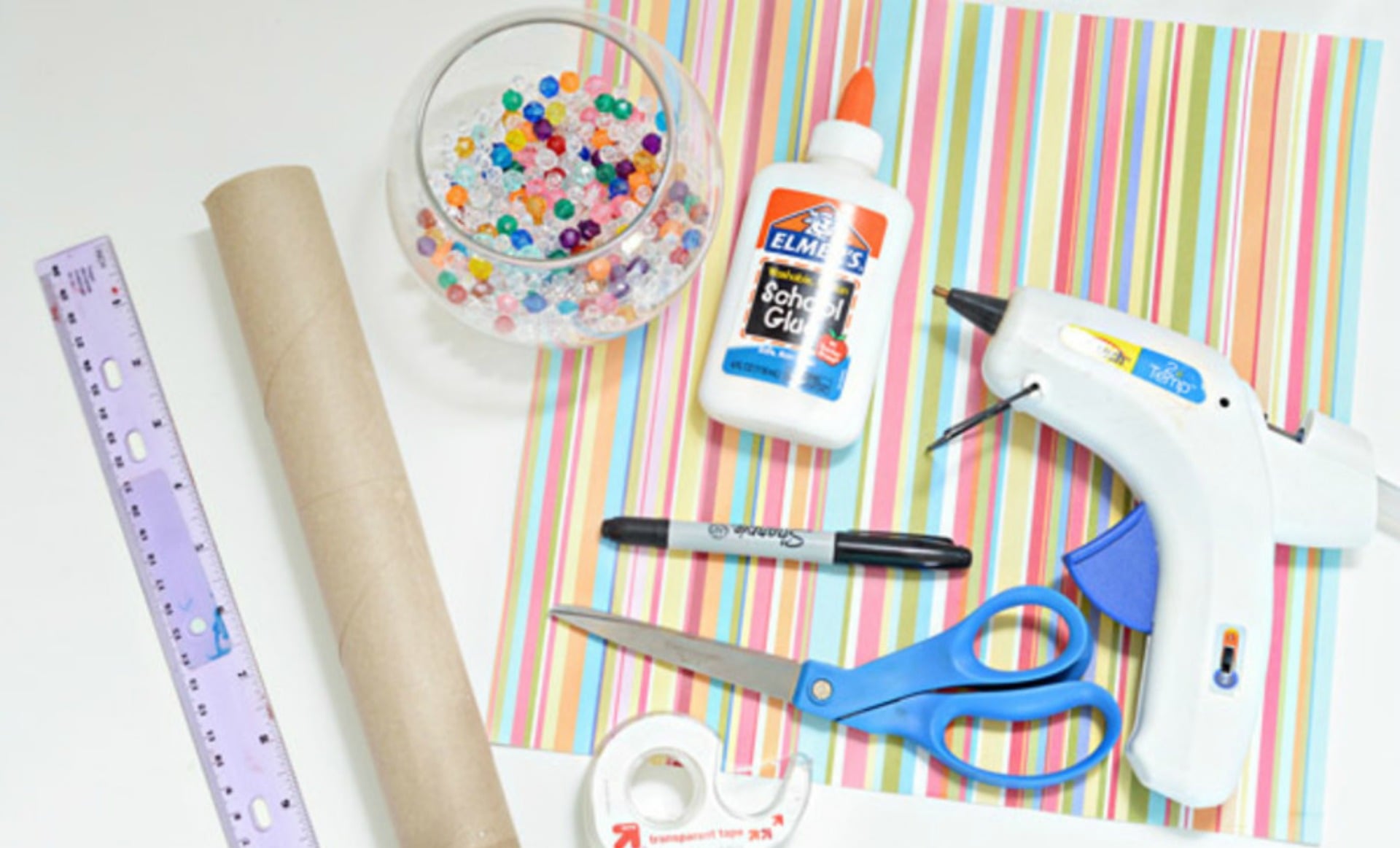 Did we really catch your attention when we started talking about using an emptied paper towel roll to make a DIY kaleidoscope because you actually just finished one today, making the idea very convenient? Then here’s an idea that will guide you through the steps for doing that specifically! We have made this paper towel and plastic bead project from She Knows with our kids before and enjoyed it very much, particularly because it makes a sort of soothing clinking sound when you turn it thanks to the beads moving around in the end. 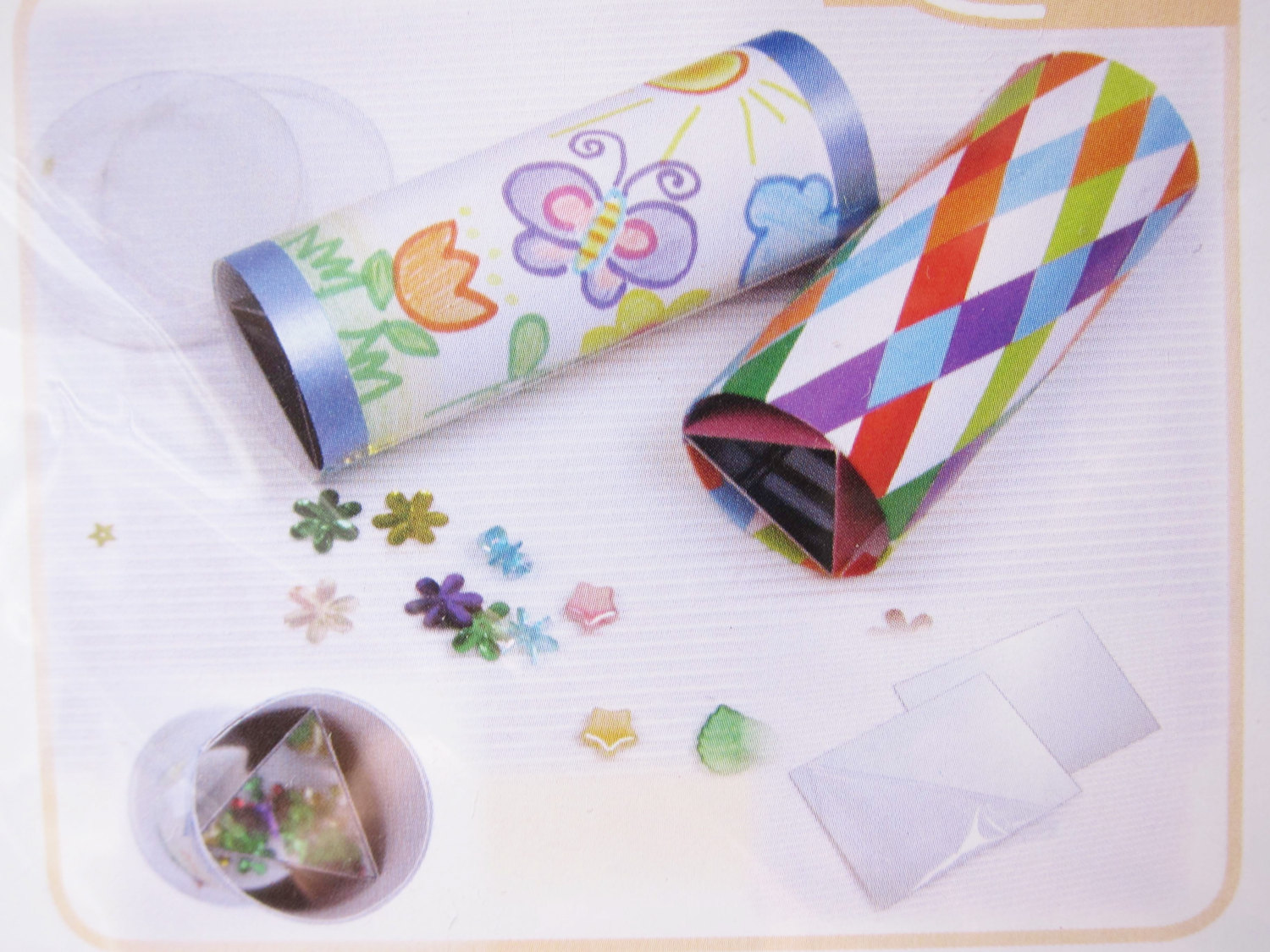 When you finally sit down with your kids to teach them about how kaleidoscopes are made, do you want to make sure you’re guiding them through the most exciting looking project they’ve done in a long time, even though you’re also helping them learn something new? Then we have a feeling you’re going to enjoy this cute and colourful idea from Shine Kids Crafts that’s covered in brightly patterned paper on the outside but that also features adorably shaped sequins on the inside. Rather than just cutting random shapes into paper or using beads that have all one silhouette, this tutorial shows you how awesome the inside of a kaleidoscope can look if you fill it with miniature stars, hearts, and butterflies. 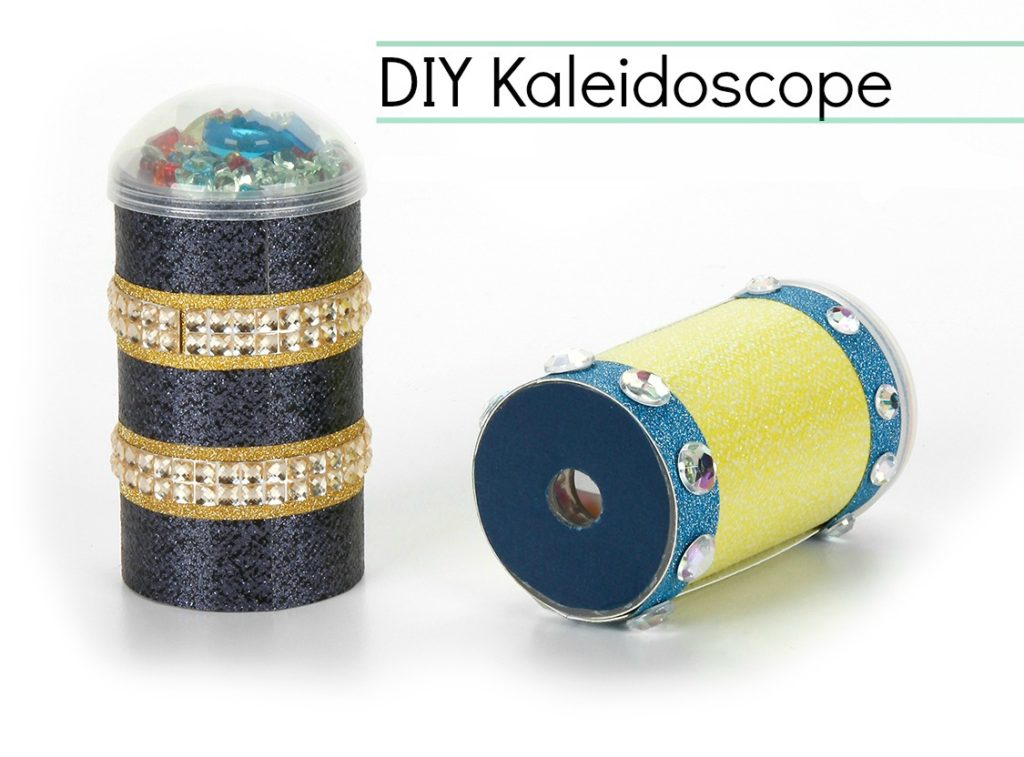 What if your kids are notorious for being most enthusiastic about the projects they get to make using unconventional tools and random upcycled things that you might not have thought about otherwise? Well, ours are like that too but they’re also total sparkle lovers who want just about everything they make to shine bright. That’s why we knew this idea from Live, Craft, Love for making a kaleidoscope from an emptied push pop case and some fun coloured rhinestones was on that we had to try with our crew right away! 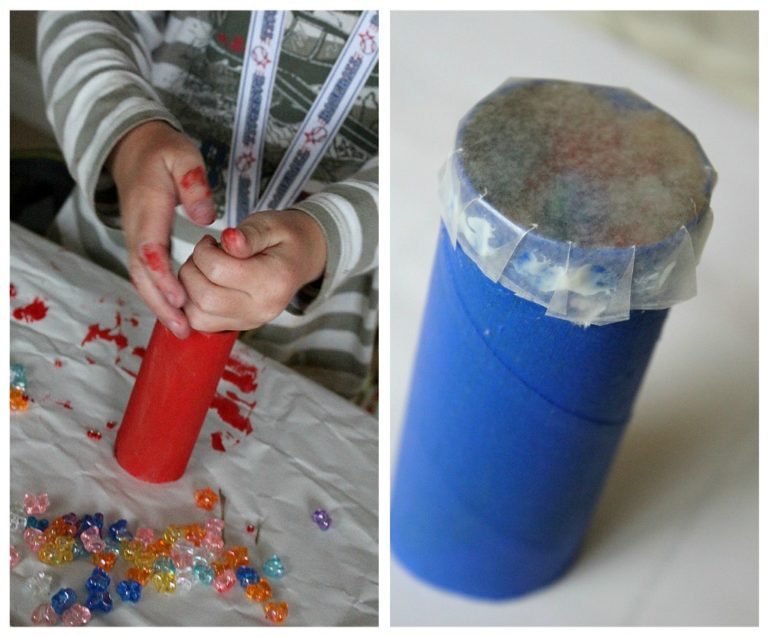 When you keep an eye out for tutorials to follow with your kids, do you usually try to look for the one with the most awesome elements involved? If we can find a craft that involves working with a good mix of neat materials, getting a unique final product that they can keep using after it’s finished, and even maybe getting a little messy, then we know we’ve hit the jackpot! That’s why we were excited to find this cute little painted kaleidoscope involving colourful beads and bits of scrap paper outlined on Multiples and More. 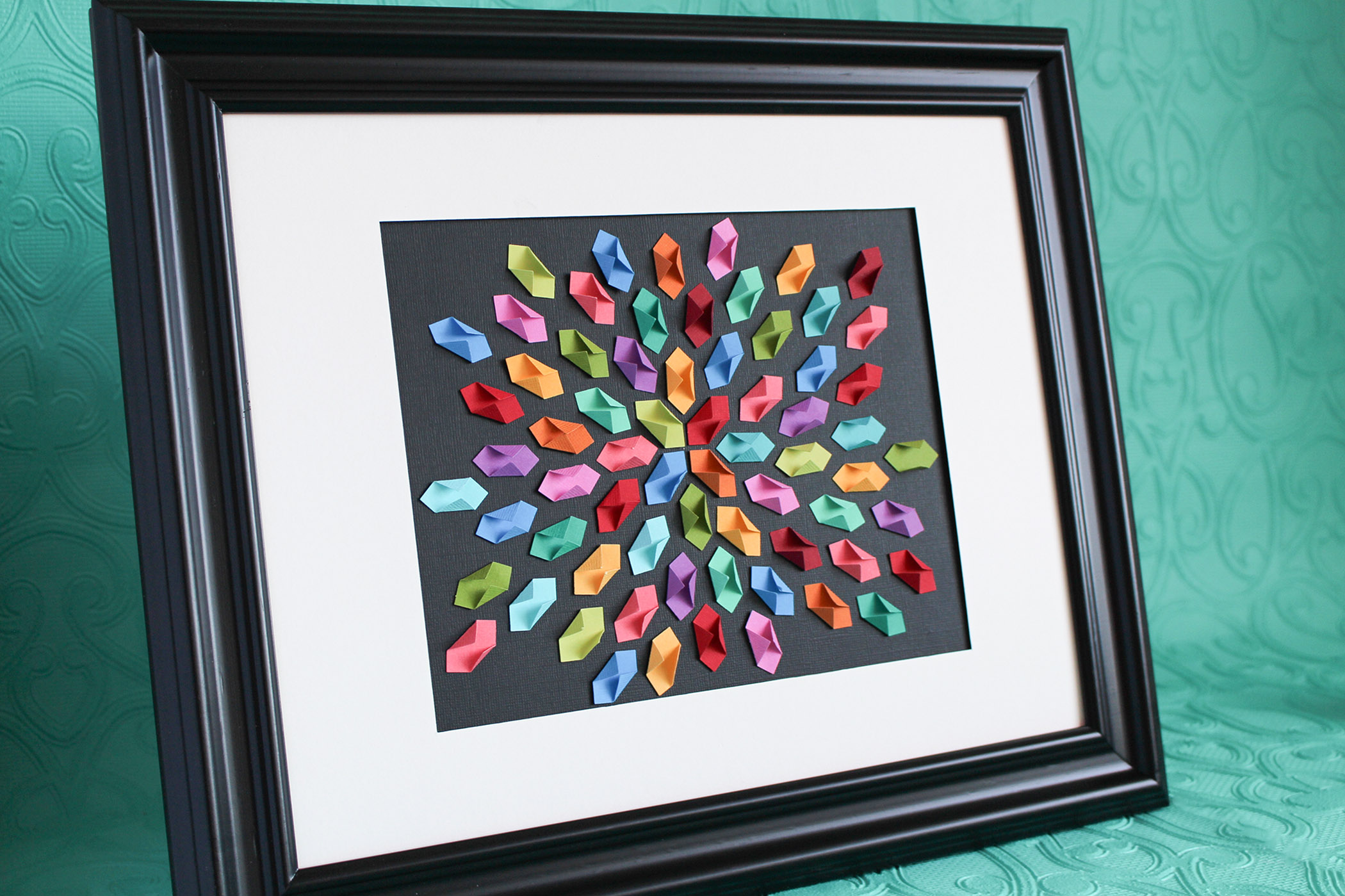 Perhaps it’s actually you who’s been feeling a little extra interested in kaleidoscopes and their colourful patterns recently? Well, the shapes and combinations that you’ll find looking into even the simplest ones are pretty inspiring to look at, so we really can’t say we blame you. That’s why we were so adamant on fitting this stunning piece of DIY kaleidoscope art outlined in steps on Craftsmumship onto our list! They show you how to cut colourful squares and fold them into a 3D shape that look stunning arranged like a burst across a black background. 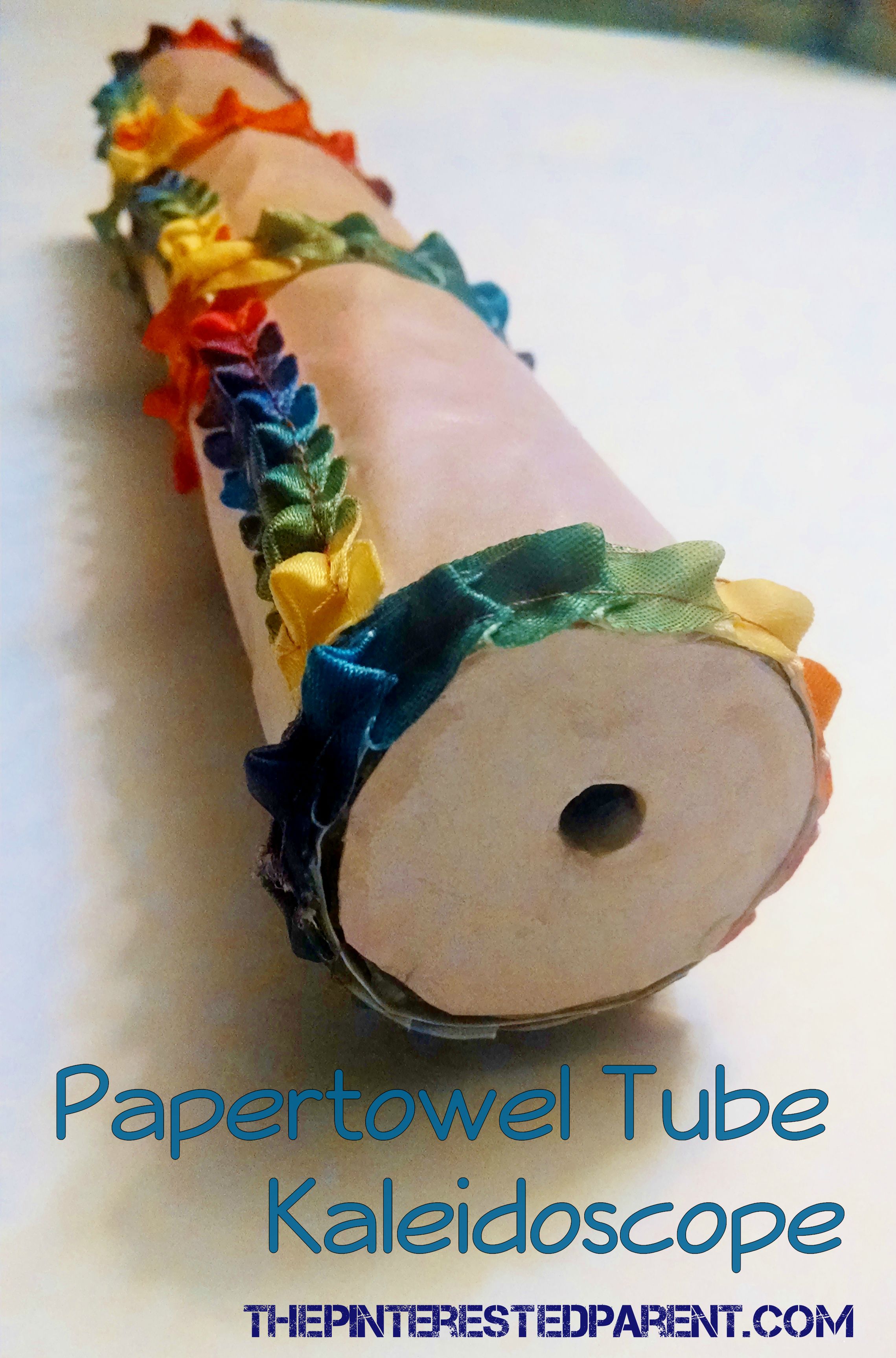 We know we’ve found all different exciting tutorials for making your own kaleidoscopes but don’t get us wrong; we know that, in the end, there are only so many different ways that you can get the same final product you’re looking for. That’s why we’re so in love with the idea of finding different ways to decorate the outside of a DIY kaleidoscope too! The Pinterested Parent suggests using ruffled ribbon trim to add some flare all around the outside of a kaleidoscope made from a paper towel tube and we actually can’t get enough of how cute the finished product looks. 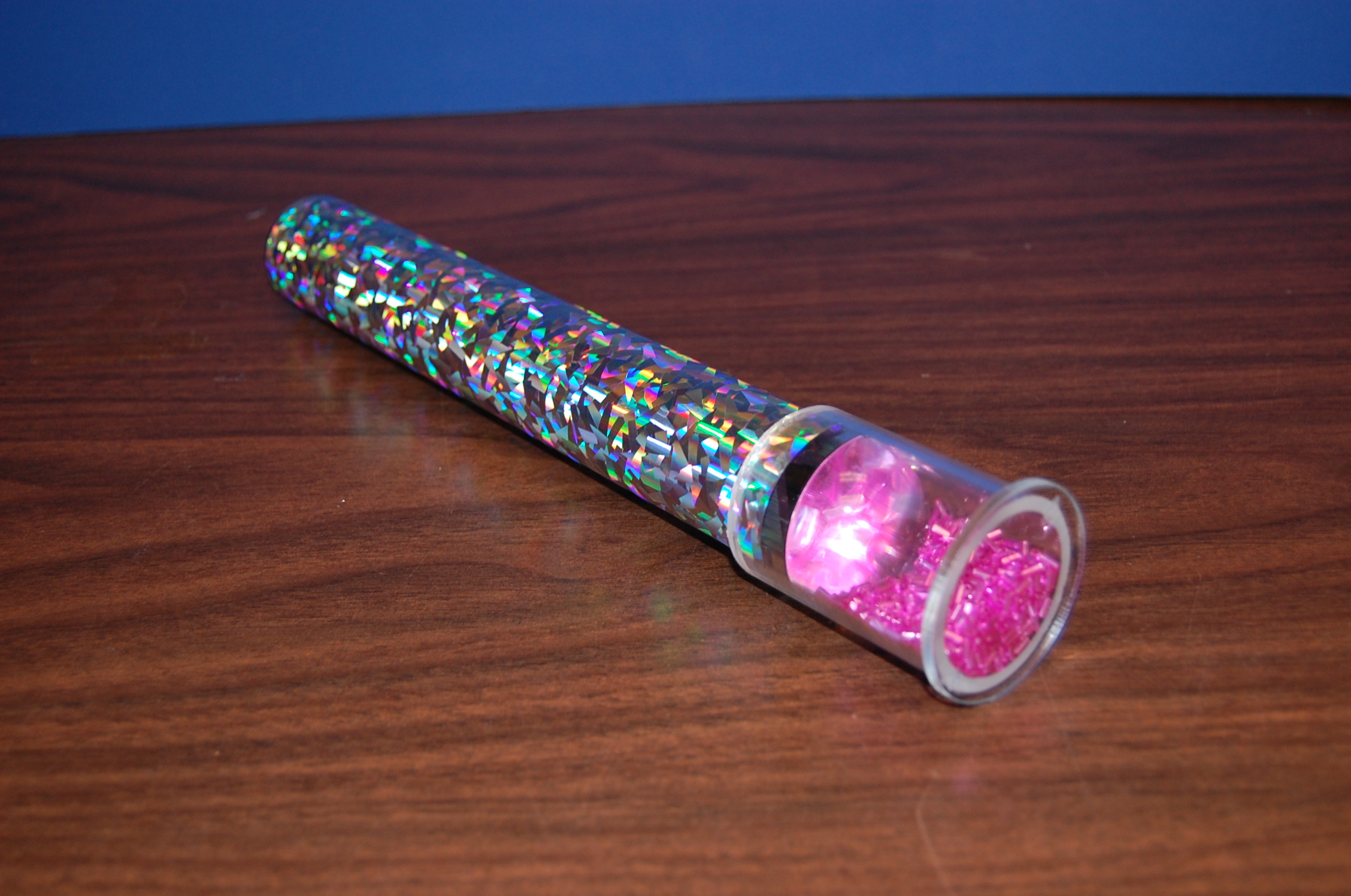 Did we sort of catch your attention when we started talking about DIY kaleidoscopes that use rhinestones because your kids really do love sparkles more than anything, but you know they’ll always choose glitter over stones if given the choice? Well, using glitter as the exciting part in the end of your kaleidoscope is definitely an option, but we hesitate to do so while crafting with tools like cardboard because they’re a little more fragile, making them a little less effective for holding tiny loose pieces in. That’s why we were so happy to stumble across this PVC pipe tutorial from Wikihow! They teach you step by step how to cut the pipe, seal the end with glitter inside, and even how to decorate the outside with a bit of holographic flare. 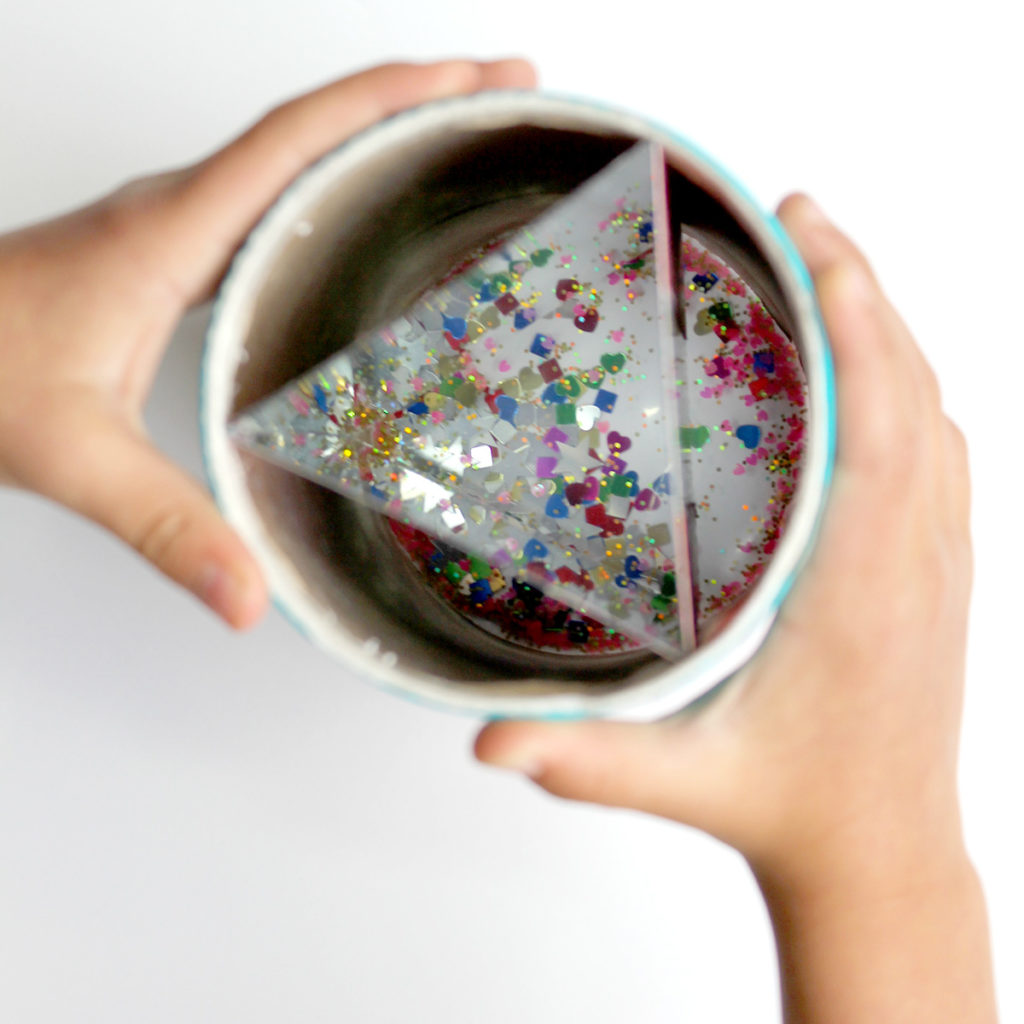 Perhaps your kids are very small and you know that they love the idea of looking through a kaleidoscope because they have a store bought toy one that they’re always reaching for, but you’d also noticed that they haven’t quite mastered the trick of closing one eye at a time yet in order to look through the little hole yet? Well, they’ll get the skill down with time the more their coordination develops but until then, why not make them a jumbo version they can enjoy without closing either eye at all? We completely adore this simple, effective idea featured on Disney Magic Academy for making a cute jumbo kaleidoscope that’s easy to see all the magic inside just by looking at it. 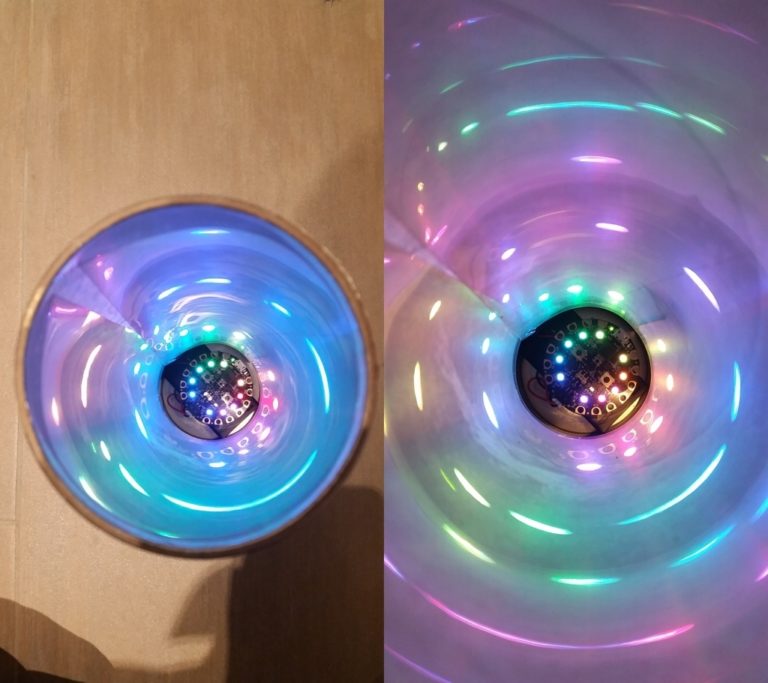 Perhaps your kids are a little bit older and have started to express an interest in making crafts that are a little “cooler” than just things made from upcycled toilet paper rolls or plastic beads? In that case, we think we’ve found a DIY kaleidoscope tutorial that’s right up their alley. Adafruit guides you through the process of lining the inside of a cardboard tube with holographic paper and affixing a small set of coloured lights on the end so that when you turn them on, the lights reflect of the shiny surface on the inside and light up in all kinds of great visual ways. 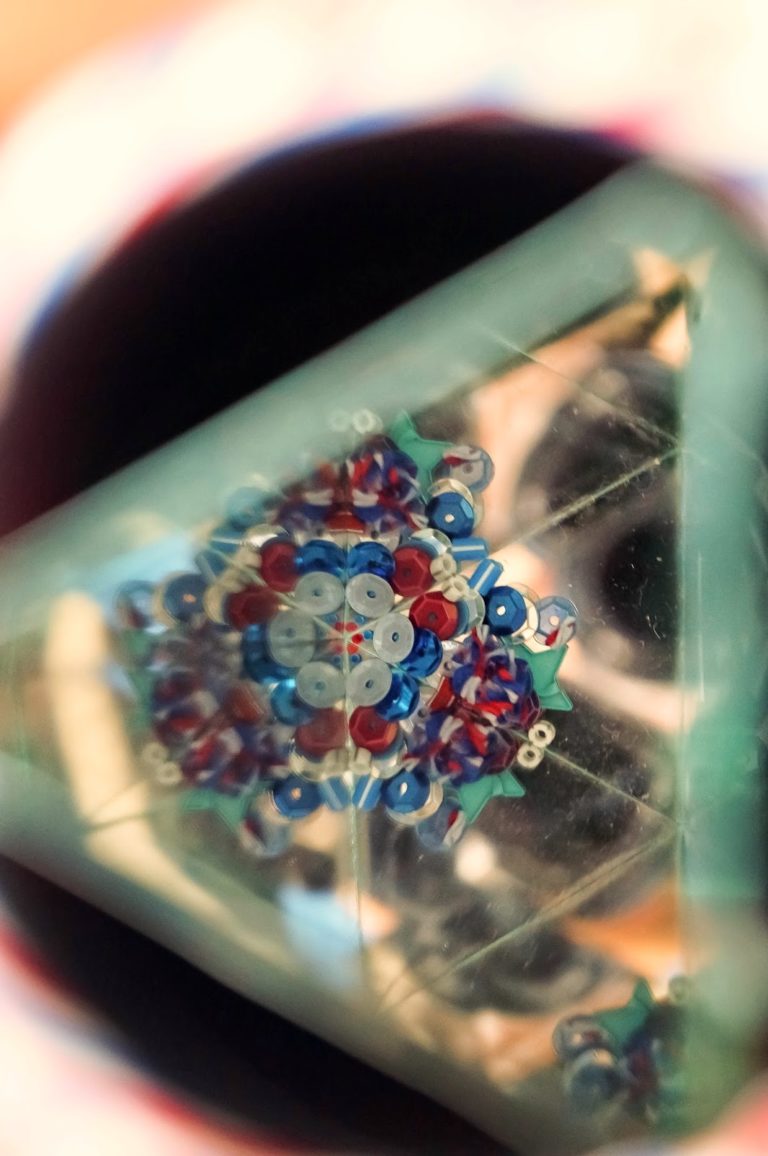 If you’re going to take the time to make a homemade kaleidoscope with your kids, would you prefer to stick to the actual, traditional structure of the kind you’d give them from a store, letting them learn about mirrors, reflections, and images properly as they craft? Then perhaps a simple version using small mirrors placed at angles and filled with small, colourful sequins sounds a little more appealing to you than some of the simpler or more unique ideas we’ve included so far! Get the instructions for making this one on Doodle Bug. 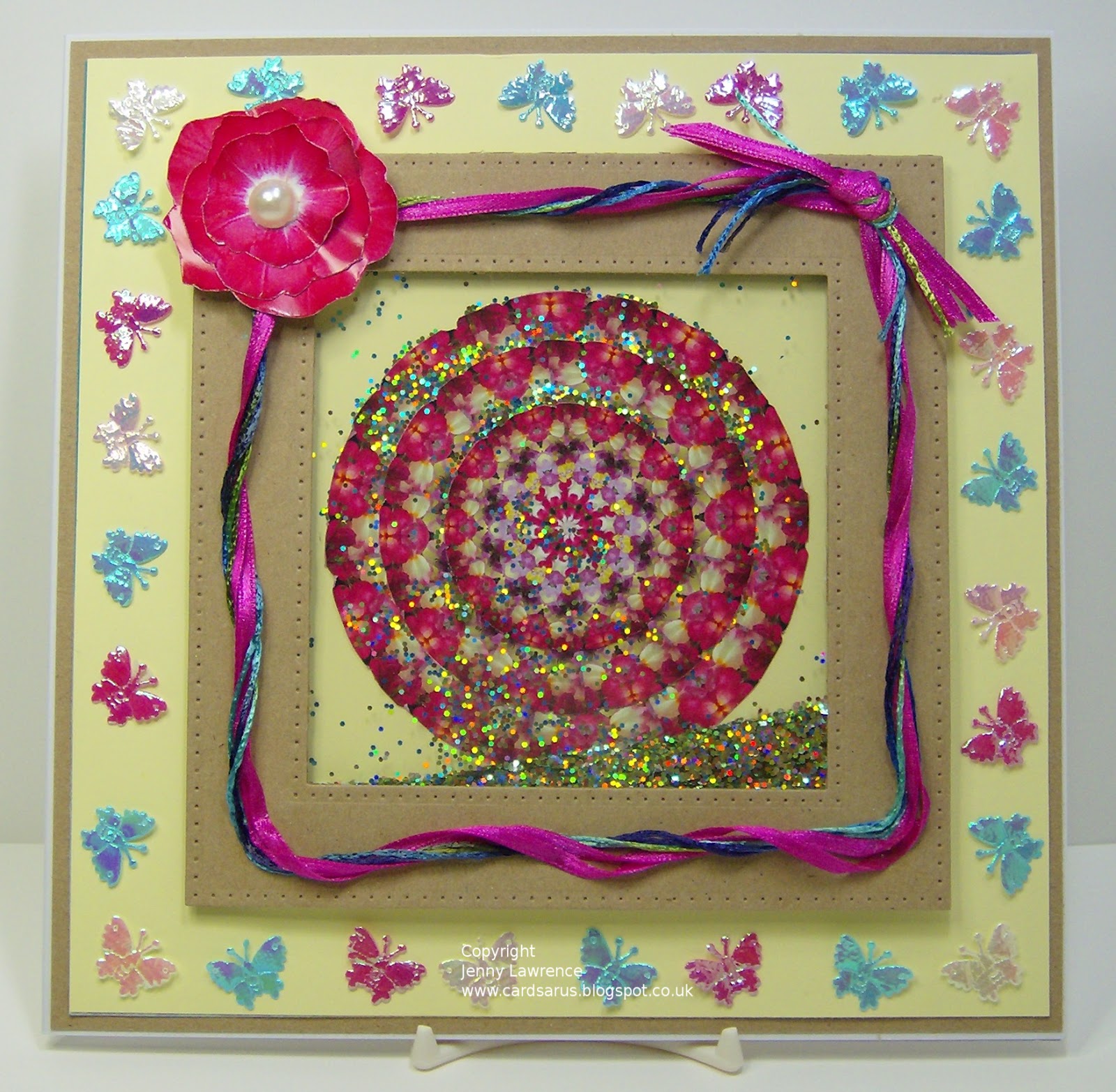 We’ve talked a lot about making your very own actual kaleidoscopes so far but at the beginning of this post, we did promise to show you at least a few projects that were different in structure and simply kaleidoscope inspired in their colour or pattern! That’s why this amazing kaleidoscope-esque greeting card featured on Cardsaurus caught our eye! They show you how to make your very own glitter shaker right on the front of the card, placing the clear plastic “window” over top of a water colour painted paper doily made to look like the angles the coloured pieces inside a classic kaleidoscope would create. 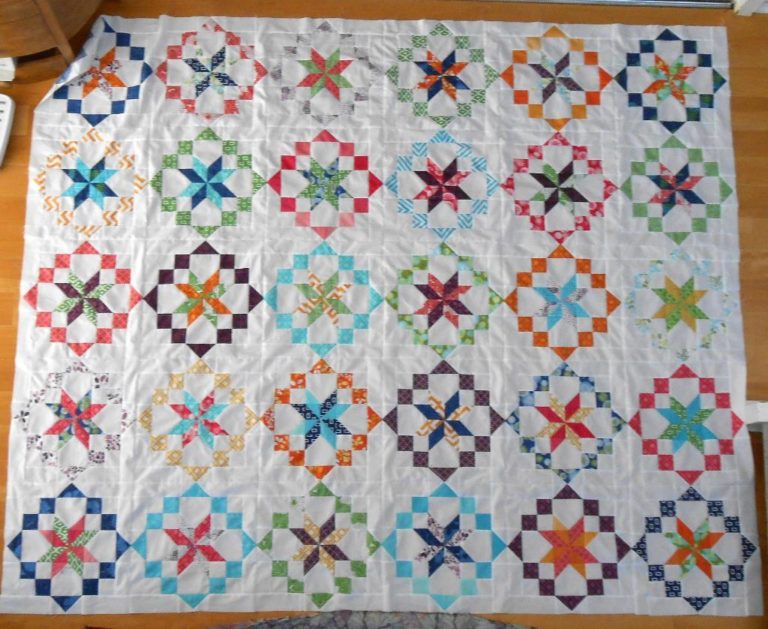 Have you been quite interested in the things we’ve shown you on our list so far but you’re actually looking for a project for yourself and your DIY and crafting skills have always lied more in the realm of fabric work and sewing? Then we definitely think you should take a look at how Craftsy created a surprisingly simple quilt pattern that will help you make a series of beautifully coloured and cut geometric patterns resembling what you’d see at the end of any kaleidoscope, but in the colours of your choice. 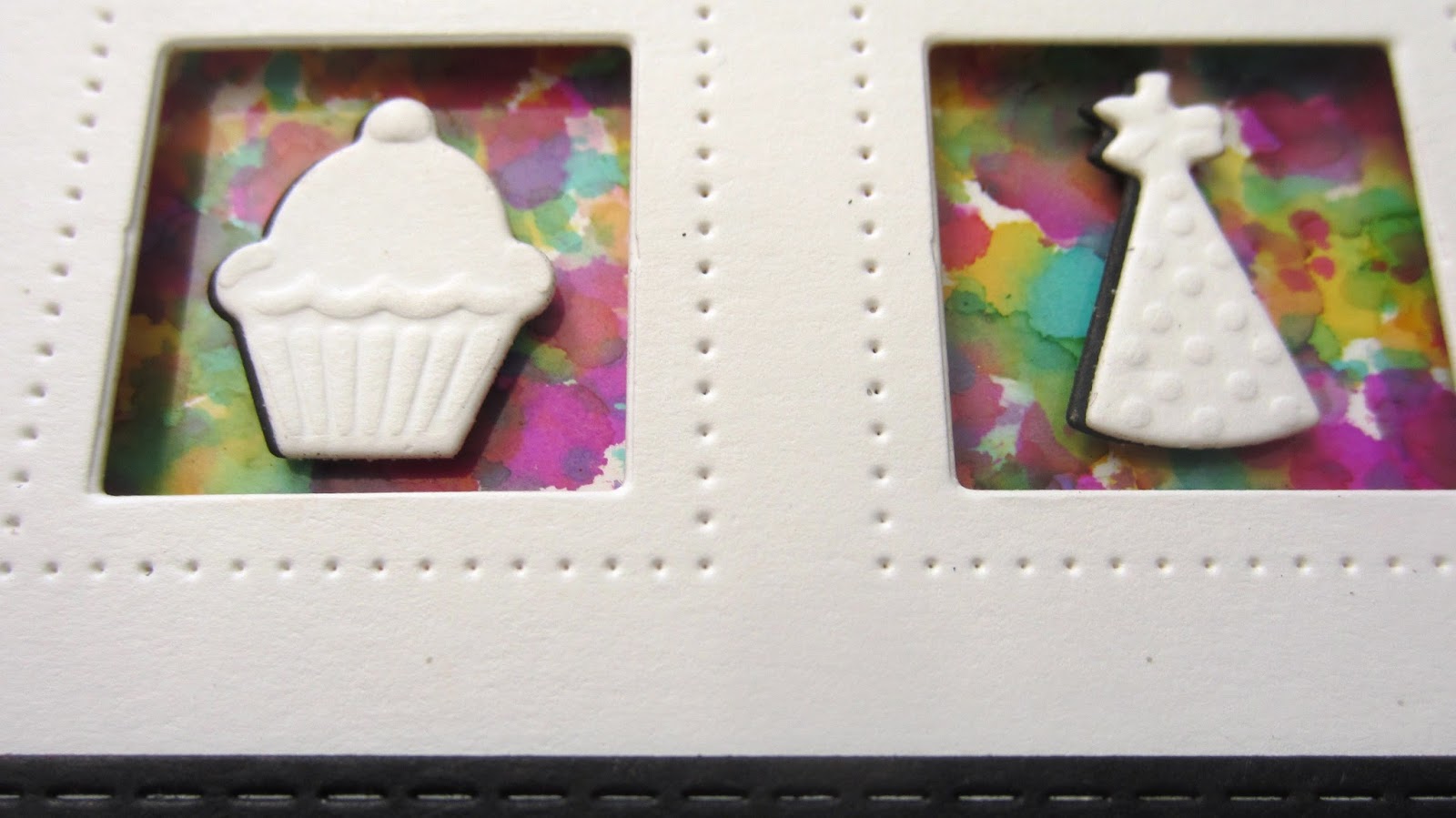 Were you kind of intrigued by the idea of the glitter shaker card we showed you earlier but something about it actually just wasn’t quite classically kaleidoscope looking enough for you? Then perhaps you’d prefer this multi-window version from Blog Lovin’ instead! Feel free to change up the little images you see in the middle of each window, just keeping the background the same as this tutorial to get that lovely kaleidoscope effect.