Here are 15 of the best tutorials and DIY concepts we’ve either tried before or held onto for later! 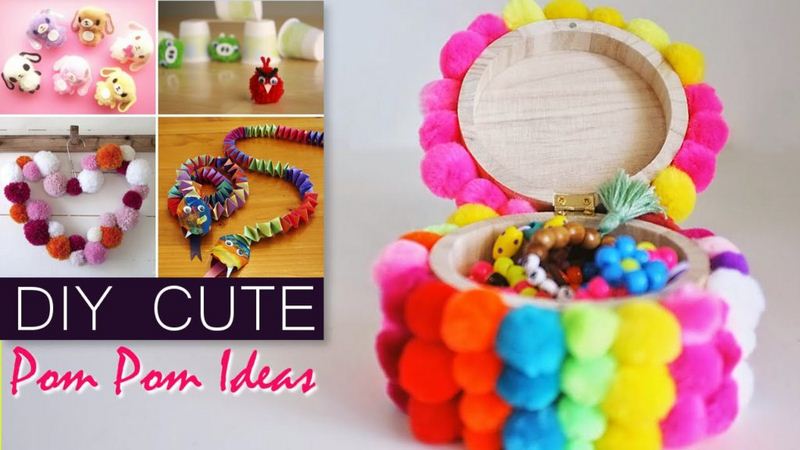 Ever since we were little kids, there’s always been something about blank, empty little storage boxes that have drawn our attention. We just can’t help but think that they’re practically calling out to be embellished and transformed with a bit of personality and some crafting skill! That’s why this concept from Simple Home Art Decor Ideas for using brightly coloured miniature pom poms to create a fun DIY jewelry box caught our eye so well. 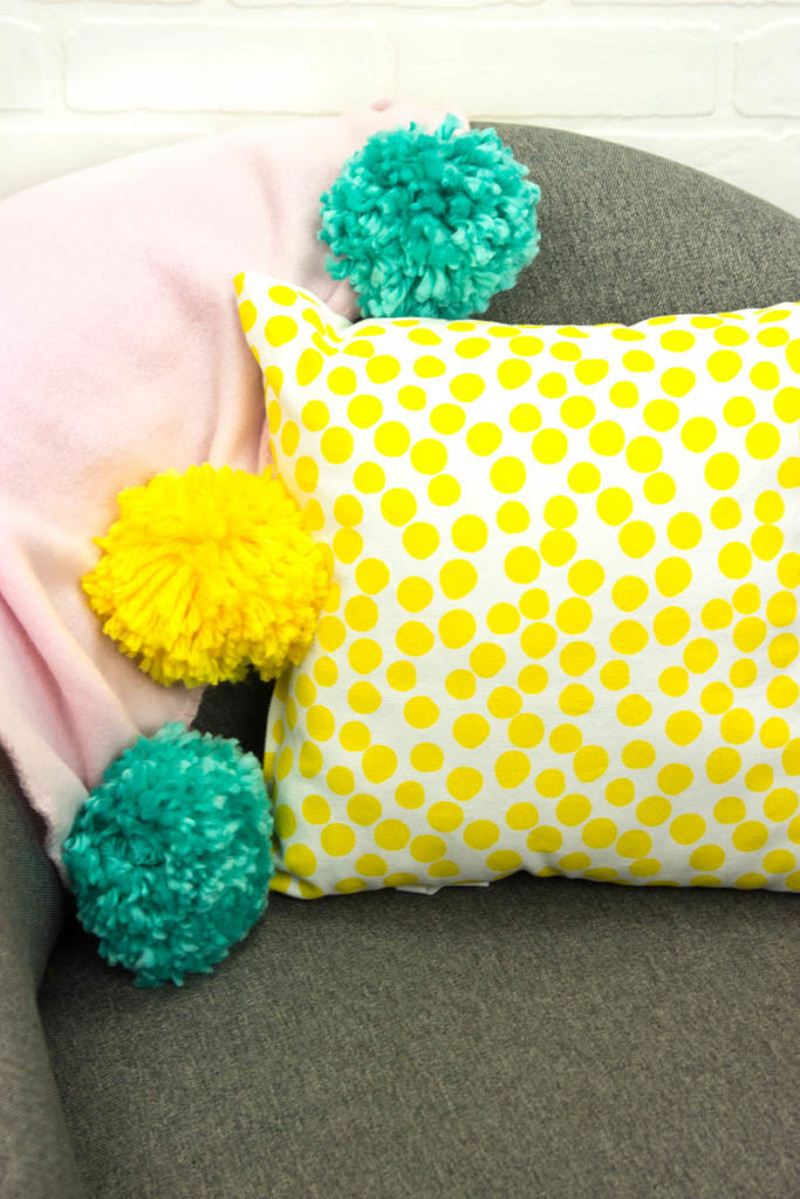 Are your favourite kinds of pom poms to make actually the big fluffy yarn pom poms that your grandma taught you to wind around a piece of cardboard or an empty toilet paper roll? Well, there are plenty of different ways to make those and even more crafty ideas out there for different projects you can turn the pom poms into, but this blanket idea from A Little Craft in Your Day is undoubtedly one of our favourites. They show you how to both make the pom poms (but you can absolutely use store bought ones if you’re pressed for time) and sew them carefully all along the outer edge of the blanket to give it a little more personality than it had before. 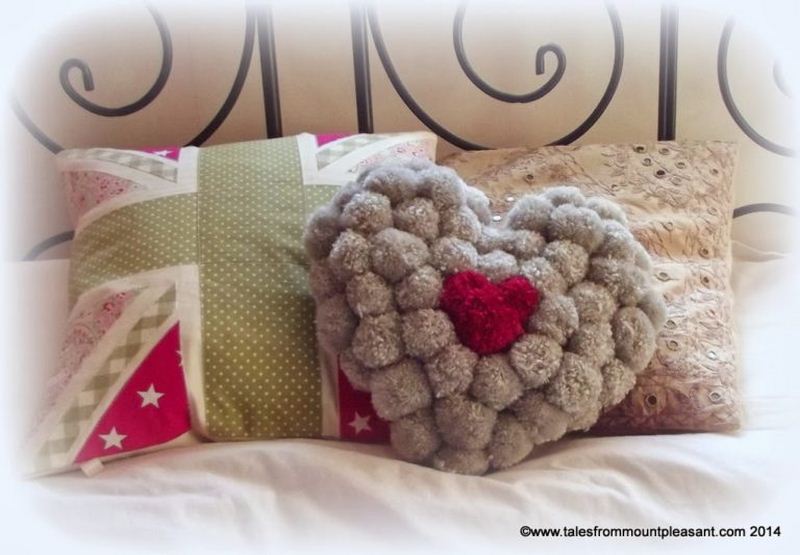 Have you ever felt a pom pom so fluffy and soft that you almost wished it was bigger just so you could give it a nice, friendly squeeze? Well, we’ll admit that we’ve never managed to make a single yarn pom pom quite that big (yet), but we imagine that squeezing this awesome pom pom covered pillow outlined on Tales From Mount Pleasant would come pretty close to how  hugging a massive pom pom would feel! Their tutorial shows you how to make a pom pom pillow that’s shaped like a heart, with a heart shaped inset in a bright contrast colour. 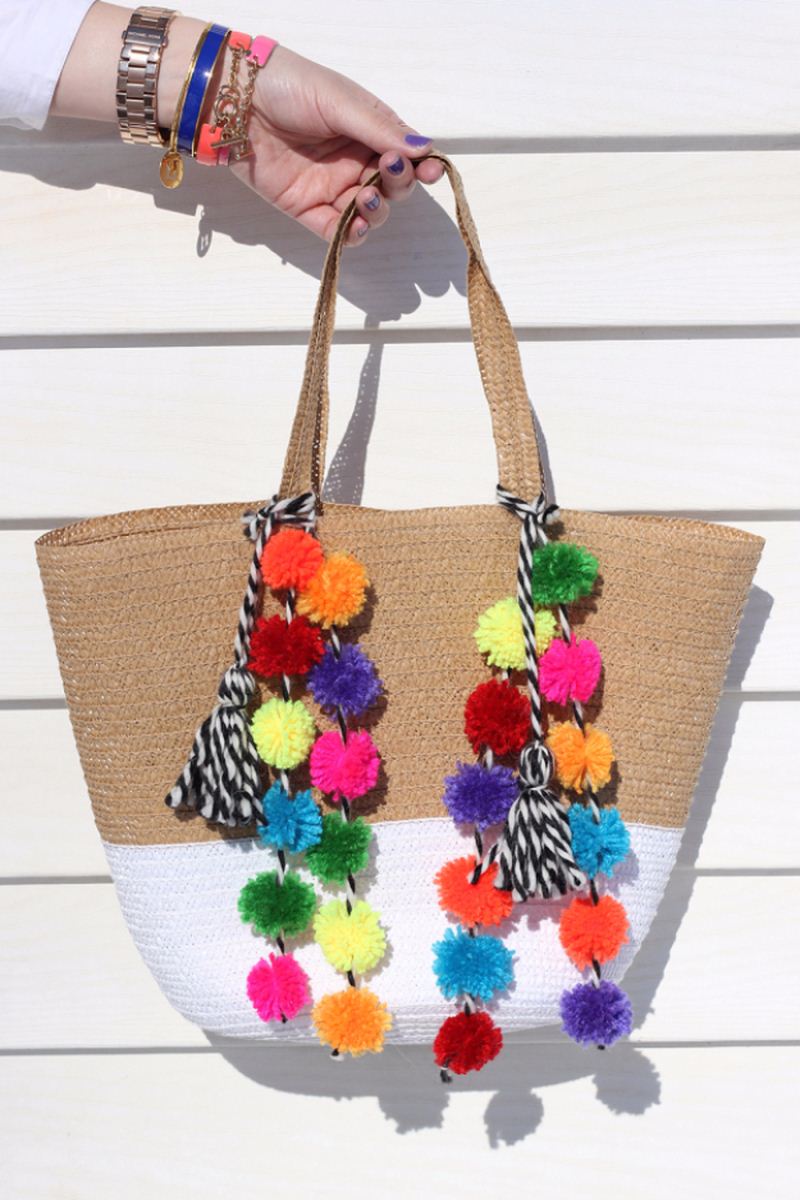 When we decide we really like a particularly useful tote bag or purse, we’ll use it every single day. After a while, however, we sometimes find that we get bored with the way the bag looks, even if we love its functionality and aren’t ready to swap it out for another bag quite yet because our things are perfectly organized into all the little pockets inside. That’s why we thought this pom pom tassel embellishment idea from Stylecaster was such a good one! They show you how to make a string of little bright pom poms that you can very simply tie around the straps or handles of your bag, finishing each one off with a tassel made from the base colour. 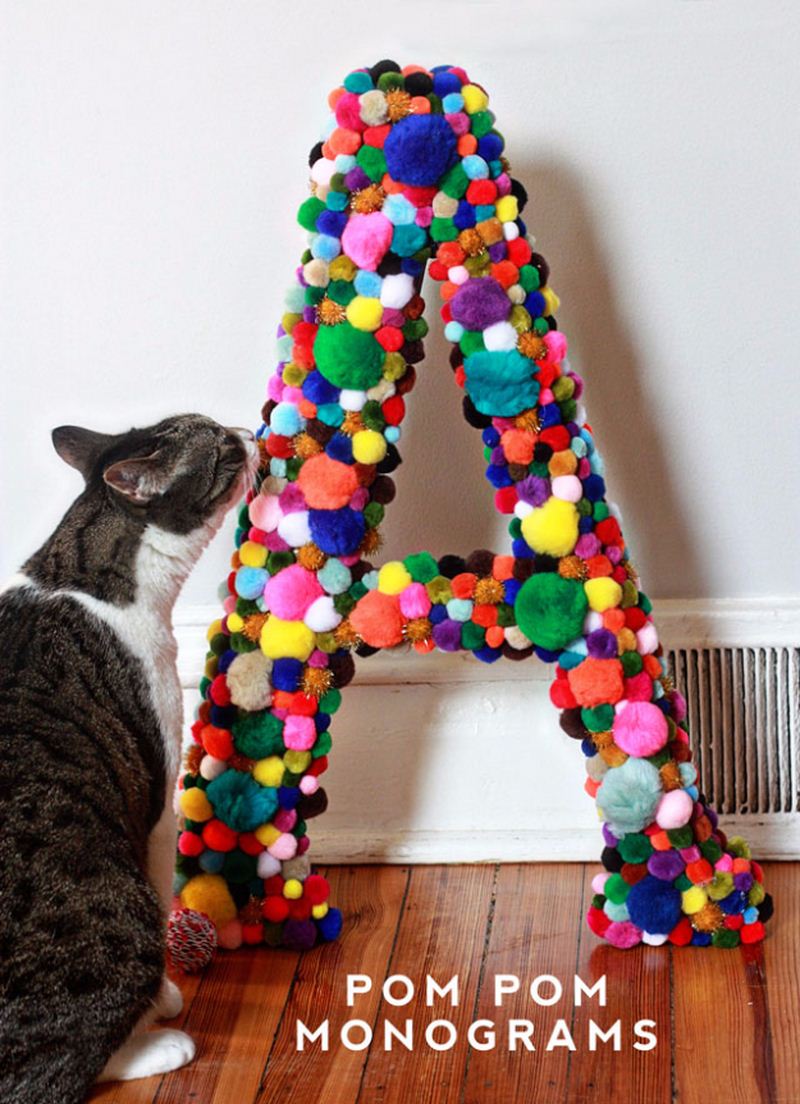 Perhaps you actually clicked on our pom pom crafting list specifically because you’ve always been obsessed with the feeling and aesthetic of those amazing bags of mixed pom poms you’ll often see in big craft stores! We can’t say we blame you at all; those bags are filled with practically endless crafting possibilities! That’s why our kids got so excited when we showed them this massive pom pom monogram idea from Aunt Peaches. Each child made one of their first initial for their bedroom and, yes, our family cat does love the pom poms as much as the one you see in this photo. 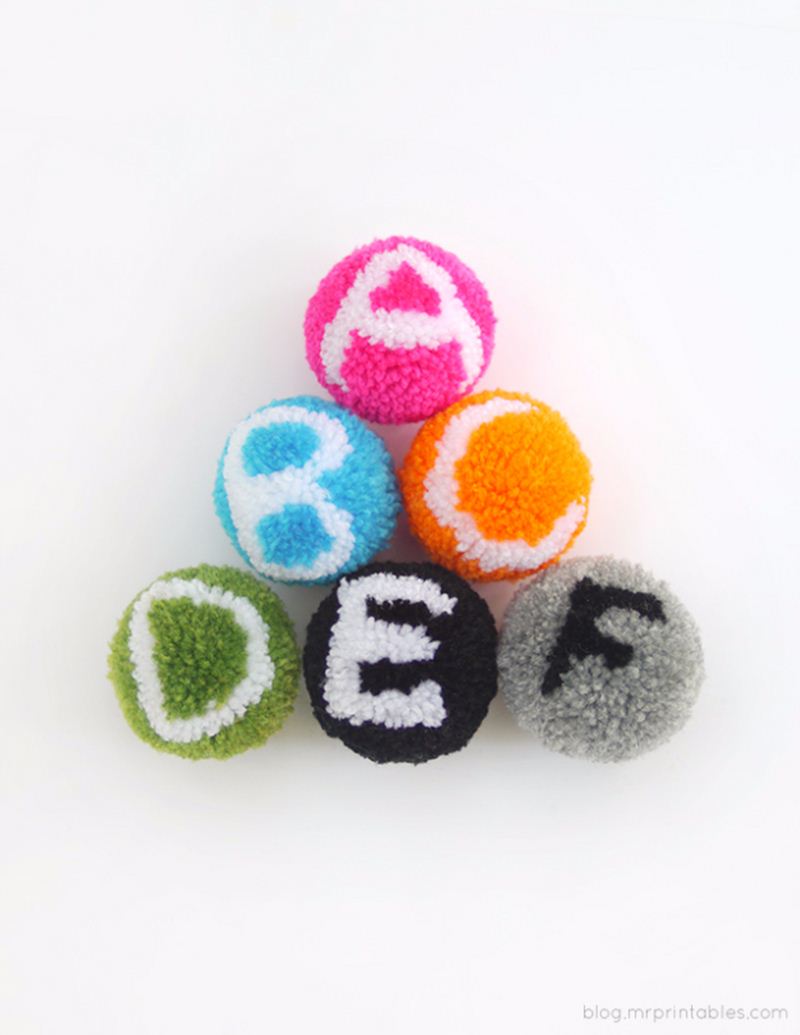 Perhaps your kids are actually a little bit too small to be making pom poms themselves, but you’re still intent on getting them interested in crafting early? Then we have a feeling you’re probably the kind of DIY-loving parent who will take any opportunity to make your own learning tools and share those with your kids to both learn and play with! We’d suggest checking out how Mr. Printables made these awesome DIY letter pom poms in all kinds of bright colours, letting your kids practice their letters in a soft, tactile way that they can even help you make themselves a little later on. 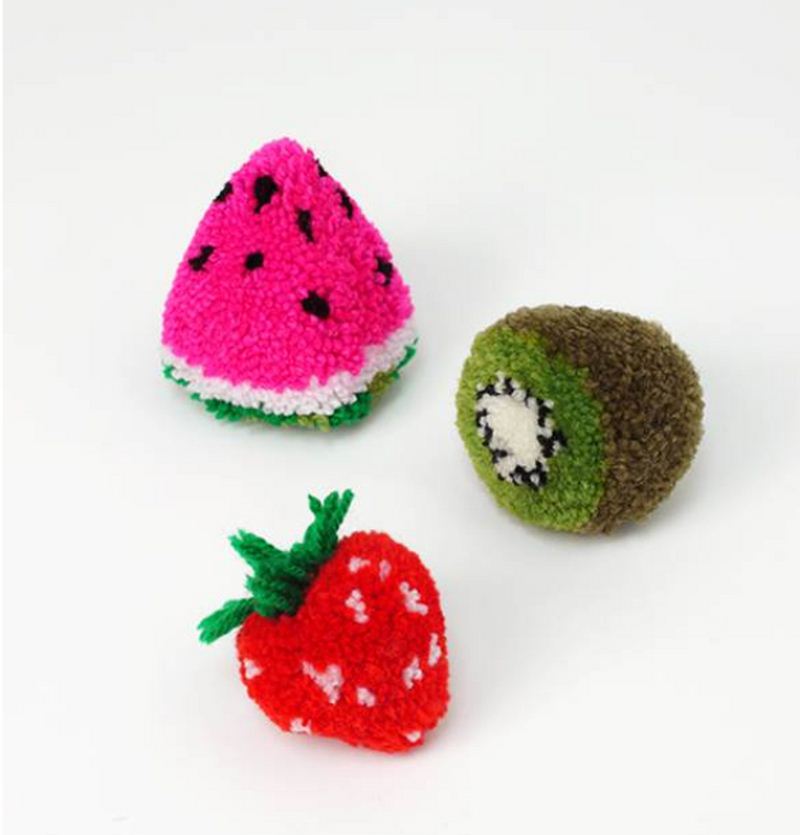 Is the idea of making pom poms that have very specific shapes and patterns new to you and now we’ve really hooked your attention? Honestly, we’re quite new to this idea as well, but we’ve been completely obsessed with making shaped pom poms ever since we first stumbled upon it! We actually made these absolutely adorable fruit pom poms outlined by iCreative Ideas recently and they were a huge hit (although we did notice that we might have been even more excited about our finished watermelon than our kids were). 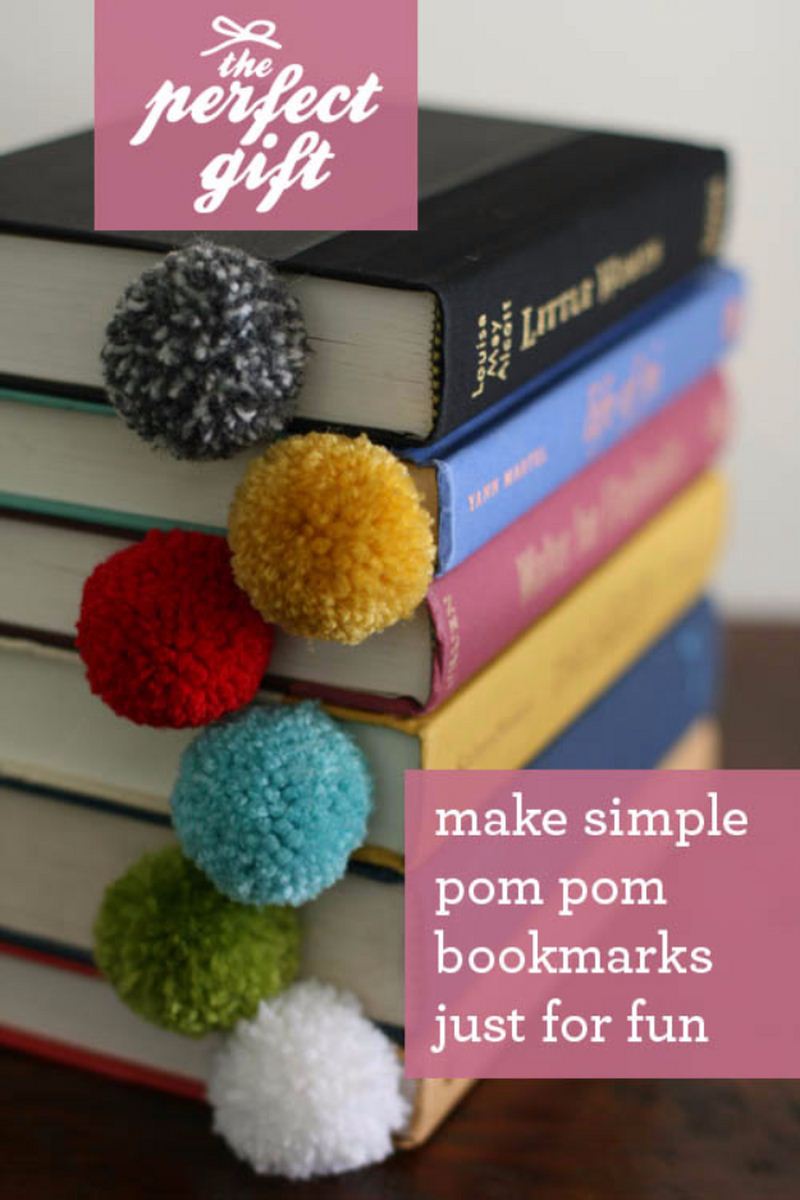 Perhaps you’re actually an avid yarn crafter who has a huge stash of skein ends laying around and you’ve been looking for quick, simple projects that will help you get some of them used up? In that case, we definitely think you should take a look at the way Design Mom made adorable book marks that let a fun, fluffy pom pom stick out the top of the book while a string marks your place. 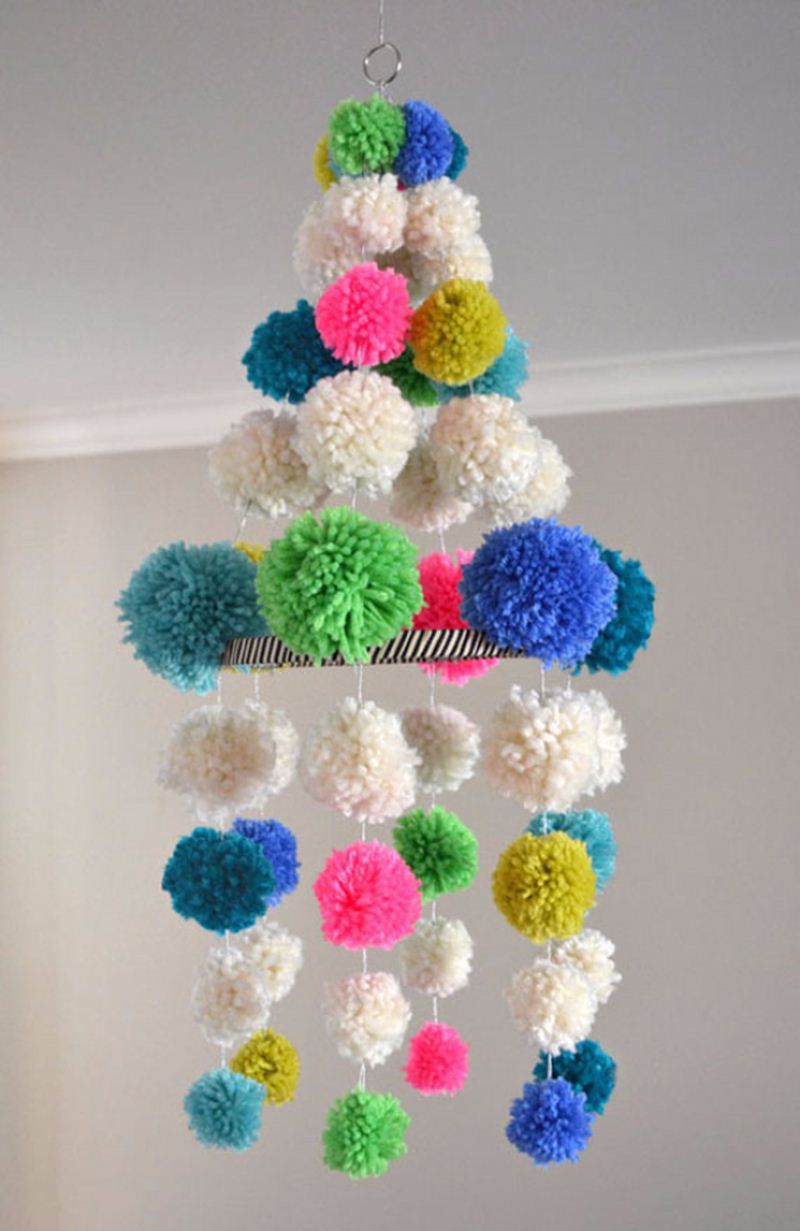 Maybe we’re just a little weird and easily excited about things when it comes to crafts, but we’ve always thought mobiles were way too cool to be relegated to just the baby’s nursery. Of course, if we’re going to put one elsewhere in our house we try to stick to a style that suits the decor or theme of the room, but every once in a while we just like the idea of making something unique and weird that has a lot of personality! That’s why we thought this pom pom “chandelier” idea from Art Bar was such a cool DIY project to try. Our kids helped make ours, so it might just be the most colourful thing in our whole house. 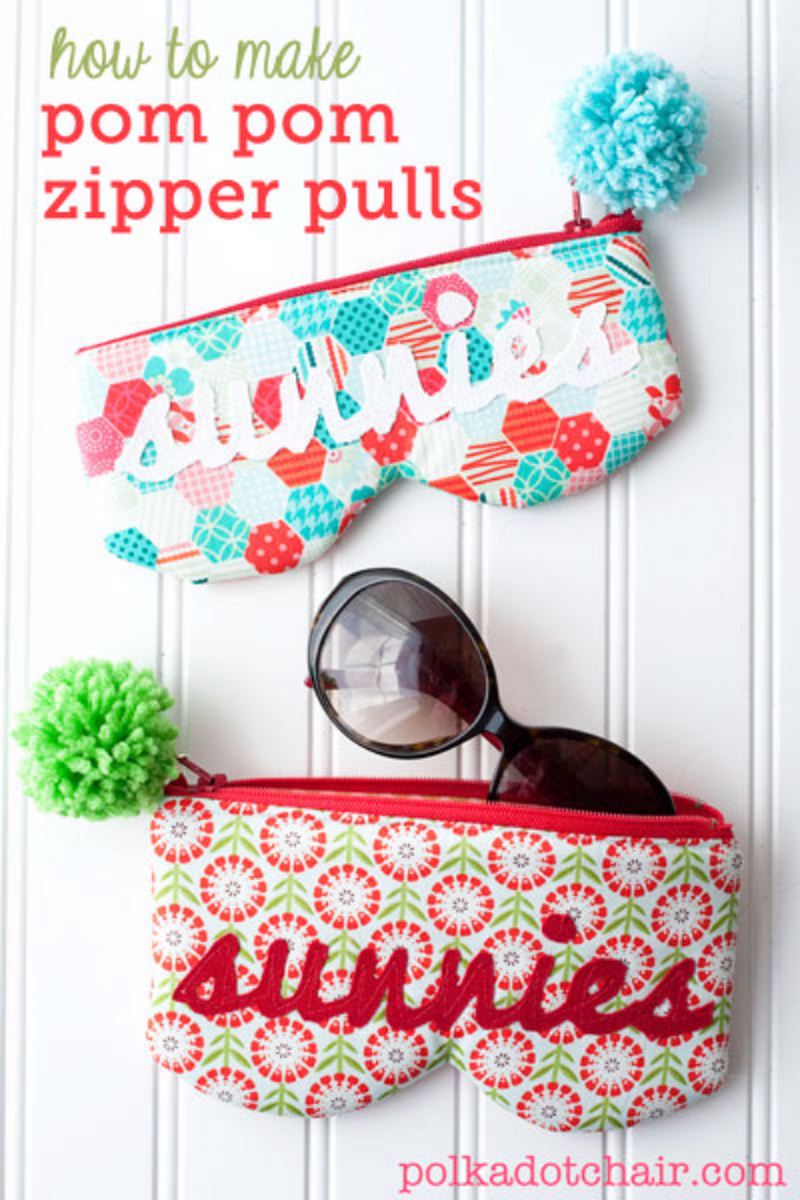 Perhaps we’re just a little bit clumsy, but we’ve always had trouble with very small zippers. You know; the kind that come on small cosmetic bags, kids’ lunch bags, pencil cases, or change purses. We’re always fiddling with the tiny tab and cursing our fumbling fingers for the time it takes us to get a good grip. That’s why we thought these adorable little pom pom zipper pulls were such a good idea! Polka Dot Chair shows you how to make pom poms that are the perfect size. 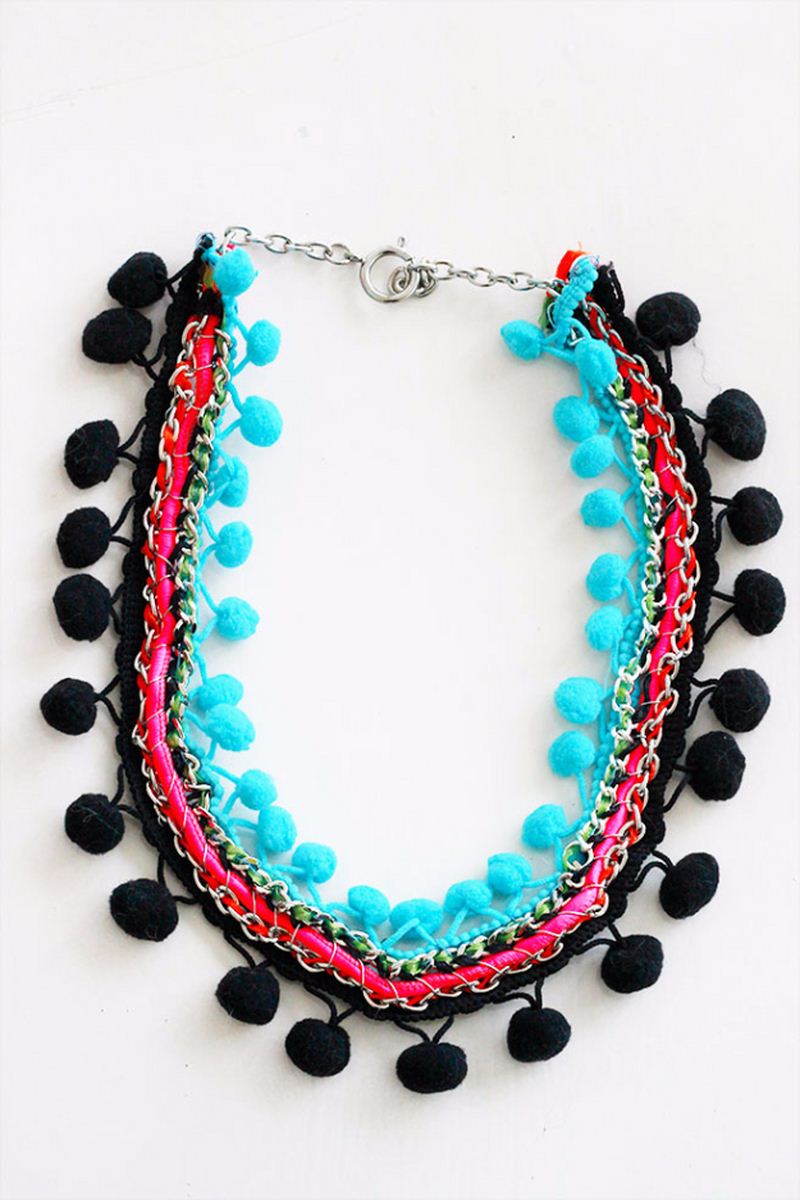 Perhaps you’re very interested in pom pom crafts but you’ve never actually made your own DIY pom poms before, and you’re just not sure you’ll have time to glue on as many individual crafting pom poms as you’d like individually for the piece you’d like to make? Then maybe pom pom trim is the answer to all your crafting prayers today! We can’t get over how unique and awesome this necklace by Lana Red Studio is thanks to the way they added multiple dangling pom poms all along its length in different colours. 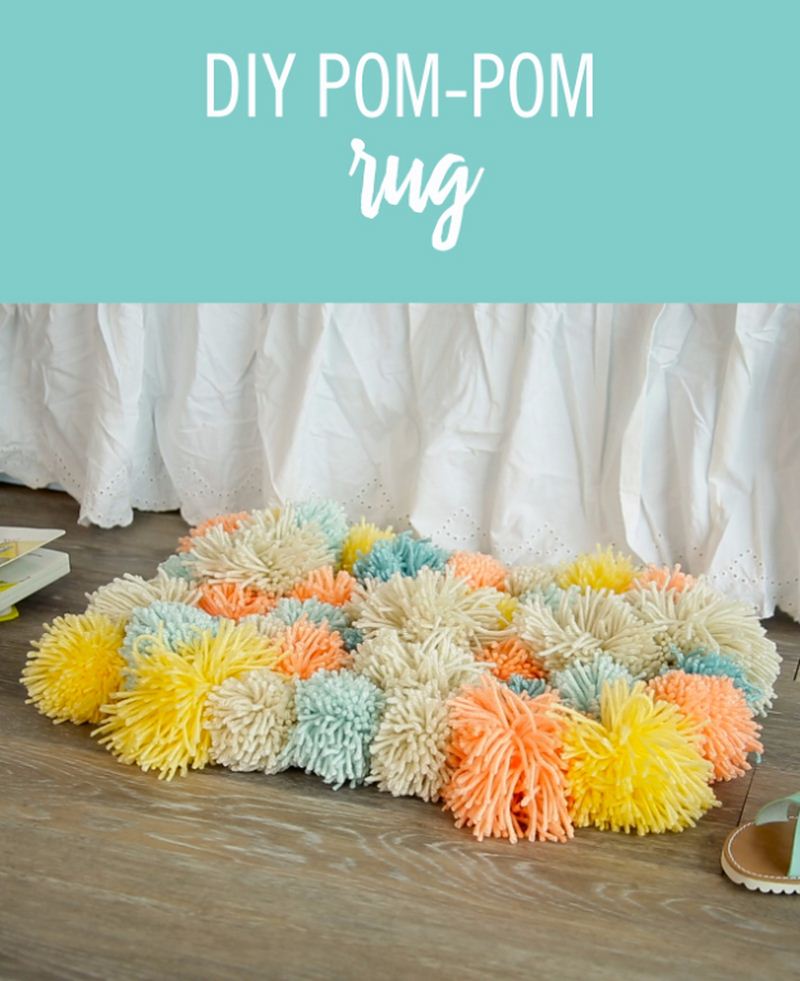 Do you actually have quite a lot of spare yarn that you’ve been looking to use up and you have all the time in the world to make as many pom poms as you need in the evenings while you match Netflix with your family? In that case, we’d suggest trying your hand at something a little bigger, like this awesome pom pom floor mat from Babble! Their tutorial shows you not only how to make the pom poms (in varying degrees of fuzziness), but also how to attach them all to a rectangular base to create the mat. 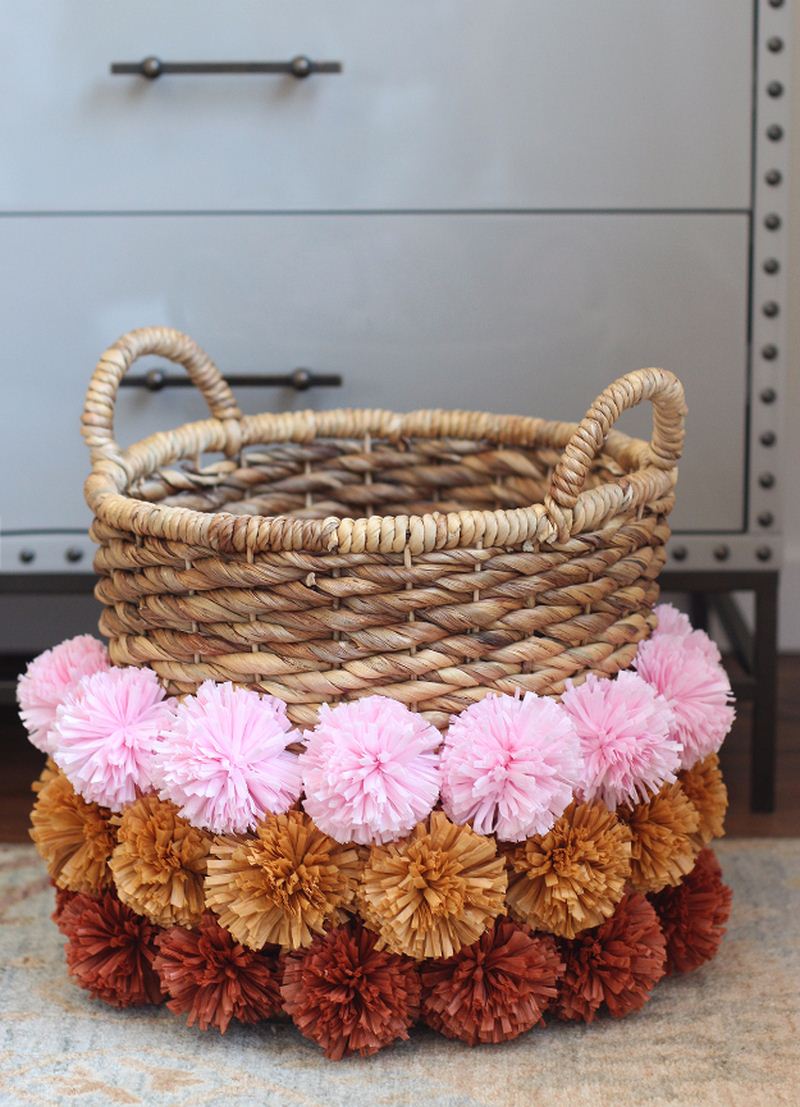 When you started looking for DIY pom pom projects, we’re not sure that the idea of working with whicker would necessarily be the first thing that came to your mind. It certainly wasn’t for us! That’s why we were so intrigued, however, when we came across this awesome DIY pom pom basket featured on Honestly WTF! They show you how to make differently coloured pom poms with crafting straw or soft whicker, layering them all around the bottom outside of a deep basket to make yourself some simple decorative storage. 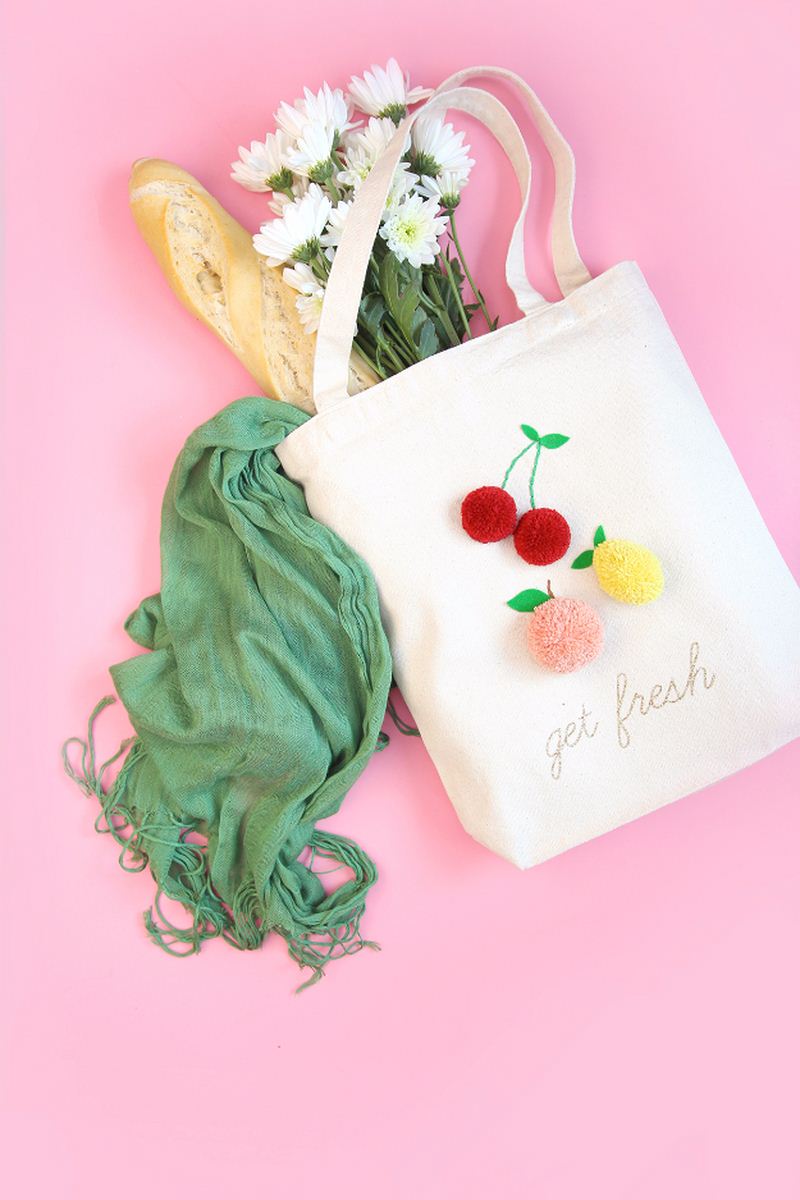 We know that grocery totes are simply bags, but we use them so often in our daily lives that we can’t help feeling they deserve a little bit of DIY attention and glamming up, just like everything else in our lives and wardrobes. Believe it or not, that’s just one more project that pom poms can help you out with! There are lots of designs that you could paint, draw, stitch, or heat vinyl onto a tote bag and them embellish using pom poms (technically, you could do just about anything that has a rounded shape, but we think these adorable little pom pom fruits by Damask Love are the cutest things we’ve seen in a long while! 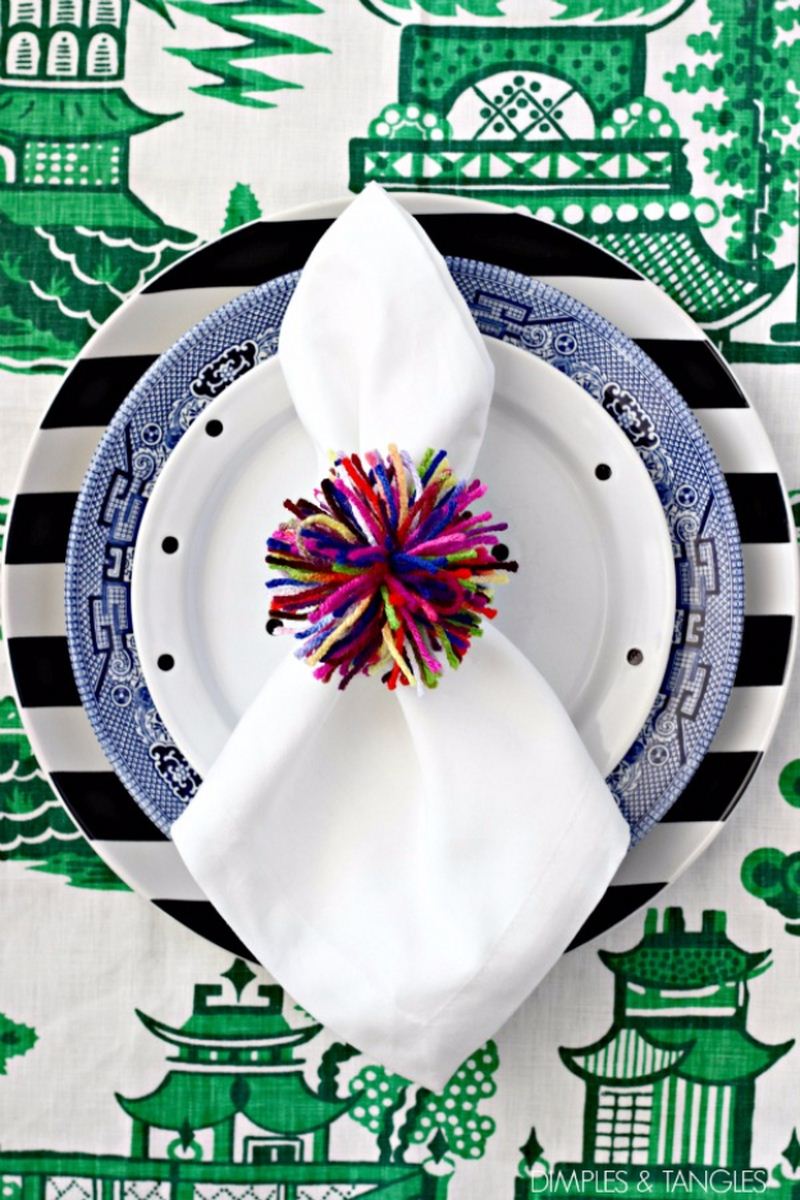 Are you the kind of quirky crafter who likes it when guests to your home can see how much you love making your very own personality filled things in every aspect, even if it’s a little unconventional looking? Well, particularly if you’re known for your love of yarn crafts, we have a feeling this awesome pom pom napkin ring idea featured on Dimples and Tangles might be right up your alley!